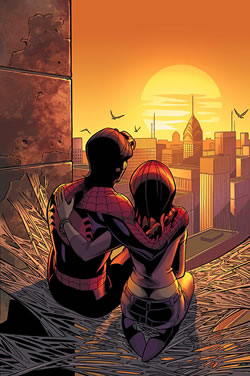 I was shocked and saddened to learn earlier this week that comic book artist Mike Wieringo had died at the age of 44, apparently from a sudden heart attack.

Wieringo was a bright spot in the landscape of contemporary American comics. I wrote about his work back in 2005 and again in 2006.

Though he had been in mainstream comics for some time, I first really noticed Wieringo’s work in Tellos, his creator owned fantasy series in which he collaborated with writer Todd DeZago. I then went back and looked up some of his work for DC and continued to follow him through his terrific run on Marvel’s Fantastic Four.

Some thought his bright, lively and somewhat cartoonish style was inappropriate for the supposedly “serious” title (which is absurd, the original Stan Lee and Jack Kirby stories that set the standard for the title were hilarious, and it was really a send-up of DC’s stick-in-the-mud superhero group titles at the time). Marvel took Wieringo and writer Mark Waid off the book only to be inundated with waves of protest from readers who, like myself, thought they were doing a terrific job and wanted more. Marvel quickly relented and Waid and Wieringo completed their planned run on the series.

A good chunk of that series was reprinted in the hardback collections Fantastic Four, Vol 1, Vol 2, Vol 3, Vol 4 and Vol 6. (I think Vol 5 featured different artists.) These are the slightly oversized hardback reprints that I think make a great showcase for these comics. The little bit of extra size is enough to make a nice difference in how the artwork looks and this series is a good introduction to Wireingo’s work if you’re not familiar with it. You can also get paperback collections of the Tellos series.

Wirengo was a long-time blogger and his blog Mike’s Personal Soapbox was one of the first I listed in my sidebar when I started writing lines and colors. His website was recently re-designed.

There is a thoughtful remembrance by Cully Hamner on Newsarama, which gives you some insight into Mike as a person, and lists two charities that the family has listed in lieu of flowers, The Hero Initiative and the ASPCA.

Mike Wieringo drew numerous memorable comic book covers, like the one above from Friendly Neighborhood Spider-Man #4.

[Notice via Newarama and Drawn!]