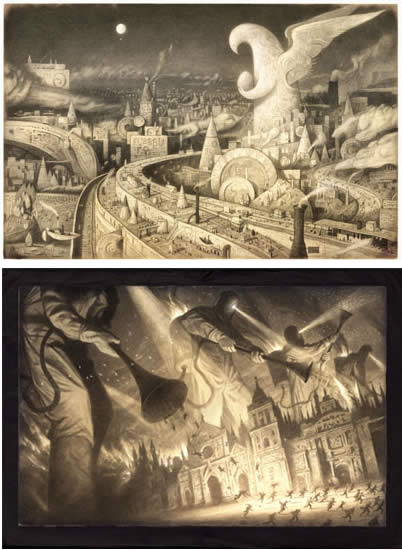 When I first wrote about Australian illustrator and writer Shaun Tan back in March, it looked as though his site was on a server with limited bandwidth, which visits from lines and colors readers quickly overloaded. This unfortunately rendered his site inaccessible for several days, if not weeks, so many of you didn’t get to see it at the time.

Tan has revised his site, and added some striking new material from his most recent book, The Arrival (slated for US release in October), which are more than enough to warrant another visit. These are beautiful and fascinating pencil illustrations that tell their story without words. Though there is definitely a narrative, the actual story presented by the images is open to much interpretation and imaginative fancy on the part of the “reader”.

(Wonderful experimental narratives like this are one of the reasons you’ll hear me gripe about the misappropriation of the term “graphic novel” by the comic book industry to refer to any old bunch of comics with a book-like binding.)

Unfortunately, though improved in many ways, Tan’s new site is in frames (for reasons that elude me), and I can’t give you a direct link. Go to the picture books page and click on the cover of The Arrival.

If you haven’t seen Tan’s work be sure to investigate the rest of the site, particularly the other entries in the picture books section.