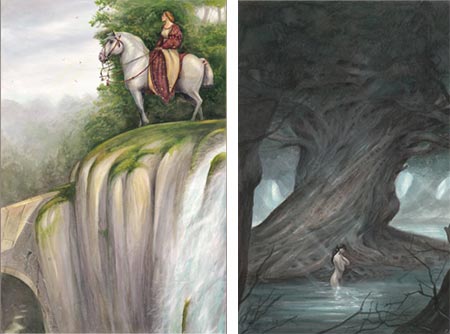 Armel Gaulme is a French illustrator and graphic designer living in Paris. The bio on his site is very brief, but emphasizes that his love for painting and illustration, and the study of artists whose work he admires, has carried him farther than his formal academic training, though he continues to pursue courses at the Ateliers des Beaux-Arts and the Duperré School.

There is no client list on his site, but the names of books that he has illustrated and collections (albums) of his work are included under the images. Unfortunately, they don’t seem to be directly available in the U.S. but you can see a selection on Amazon.fr.

Gaulme leans toward fantasy and historical subjects, with a nice emphasis on medieval knights, castles and the Arthurian legends. There is also a book, apparently new, showcased on his site, called Créatures: Insolites & Stupéfiantes (Strange and Amazing Creatures), an imaginary bestiary accumulated during the travels of a fictional adventurer. (I can’t give you direct links within his site because it’s in a single Flash file.)

When looking though his online galleries, be aware of their multi tiered nature so you don’t inadvertently miss things. Within the categories and sub categories at the top of the page, there are third-level tabs at the left of the image space, and the rows of thumbnails have “Prev” and “Next” buttons to additional screens. Also there is a bio and list of links tucked away in the “Contact” section. Interestingly, the text portions of his site are in English.

Gaulme has a nicely imaginative approach, in a variety and sometimes mixture of media. Occasionally his pieces are accompanied by preliminary sketches. There are also sketches and drawings in their own sections. Though many of them are quick suggestions and gesture drawings, some are carried to a high degree of finish as works in themselves.

Gaulme is still fairly young, and I think we’ll be seeing more from this talented illustrator in the future, hopefully on both sides of the Atlantic.

One Reply to “Armel Gaulme”