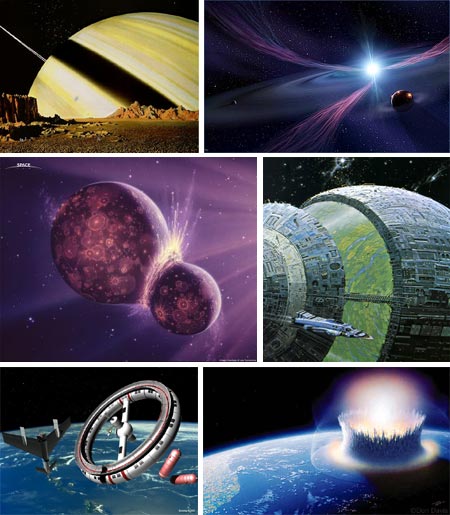 Artistic visions of “the heavens” have been with us throughout the history of art, but pictures of space and planetary bodies probably date from the late 1800’s when conjecture about flights to other spheres became the topic of popular literature.

Since then artists have portrayed other worlds with varying intent and degrees of scientific accuracy, but space and astronomical art have played a vital role in our understanding of the universe beyond our little blue paradise.

Sometimes astronomical artists are called on, like paleontological life restoration artists (i.e. dinosaur artists), to construct visions that science projects, but that we cannot see directly.

Sometimes they are instrumental in envisioning the means by which humans will actually reach out into space, as in the case of Chesley Bonestell, the father of modern space art, whose visionary paintings of spacecraft, orbital platforms and moon landings, made in cooperation with Wernher von Braun, helped convince the U.S. Congress that the original space program was feasable and worth funding.

You might think that an era in which you can easily access dazzling high-resolution photographs from the Hubble Space Telescope on the internet would render astronomical art less relevant, but an artist’s mind can still see things even the most powerful telescope can’t

Space art continues to hold an important place in our tentative reach out into space, from projections of large scale space stations and bases on Mars, to visions of space from the surfaces of distant planets that we cannot reach.

Astrona: Space and Astronomical Art Journal is a blog-like journal of space art. Judging from the archives, it started off with a “big bang”, but has expanded more slowly since (unlike our universe, which seems to be speeding up its expansion, in apparent defiance of the laws of gravity as we know them). Later posts have expanded the definition of “space art” to include more science fiction illustration that happens to include scenes of space, spacecraft or imagined landscapes of distant worlds.

This site is a tremendous resource, and you can find lots of mind-boggling eye (and brain) candy by going through the previous posts. They are arranged by broad categories in the navigation at the top of the page, and by specific artist in the Categories listing on the right. Most of the posts are chock full of small images of yummy space art that expand into nice large images when clicked, along with a short article about the artist and links to the artist’s site or other galleries of their art.

If you go back to the first month of September, 2006, you’ll find a more concentrated selection of actual astronomical art and Space Program illustration, along with a nice introductory article on The History of Space Art. One thing I couldn’t find, however, was a credit for the site’s author.

[Link via Metafilter by peacay]