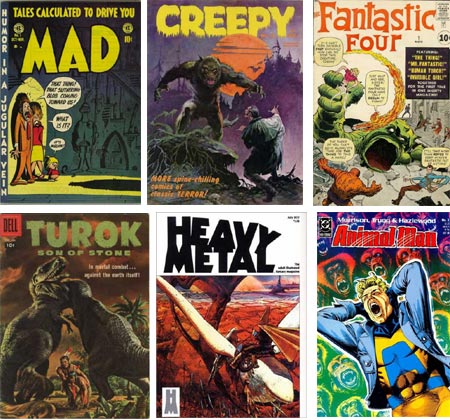 Covers of comic books, pulp magazines, and for that matter, magazines and books of any kind, have one purpose — to make you pick that sucker up and run home with it in your sweaty hands after plunking down your hard earned dimes.

Cover art, particularly from the lower part of the periodical pool, can be so wonderfully lurid, fantastic and outrageous that it’s Amazing (or Astonishing, or Astounding or Uncanny or Shocking or Spectacular, or,… well, you get the idea.)

I just love the stuff, and some of is is actually wonderfully illustrated in addition to the having the above characteristics.

By pulling from various sources around the web, Philipp Lenssen has put together a gallery (or more accurately a collection of galleries) of more than 100,000 covers from comic book series and pulp magazines, augmented with smaller selections of games, DVD, record or mainstream magazine covers.

The comic book covers are the star attraction here, and you’ll find many series. Lenssen has gone for depth rather than breadth, so you may not find your favorite title (no Strange Tales for me), but the series that are covered are often represented with a remarkably complete run of covers.

I might wish for a better index page (like a hierarchical list; boring, I know, but very usable). The gallery is arranged in an alphabetical paragraph of links, some larger than others, almost like a tag cloud. The listing of titles is actually much more extensive than it appears at first, as many of the links are headings with subcategories (indicated by double arrows) that expand when clicked on. The heading for “Batman” for example, expands to reveal 20 or so titles that featured the character.

Most of the pulps are under the heading of “Magazine”, “Manga” expands to 50 or 60 titles and “Games” expands into several sub-categories by platform.

Just cruising through the titles can be entertaining, particularly the early comics from the 40’s and 50’s, and you will find some real gems of comic book and pulp magazine illustration, like the early Mad comics covers (under “Magazines”), early Creepy and Vampirella covers by Frank Frazetta, the great Kirby covers for Fantastic Four, Will Eisner’s covers for the Kitchen Sink Spirit collections, the wonderful old Dell Turok: Son of Stone painted comic covers with their dramatic dinosaur scenes, Heavy Metal covers by Moebius and Bilal, and the still funny National Lampoon covers.

The magazine section contains titles you wouldn’t expect in this context, like The New Yorker, Rolling Stone, Vogue, and Esquire in addition to the more expected Fantasy and Science Fiction, Astounding Stories and Popular Mechanics.

Unfortunately, some of the images, like Brian Bolland’s wonderful Animal Man covers, are over-compressed and blurred with JPEG artifacts, but I think some of the assembly of the site is automated and Lenssen has limited control over the images from his sources.

The About section describes the sources of the images, and gives a picture of how the covers are distributed by type.

The Labs section (an easy-to-miss link a the top of the main page) is to extra features and amusements like the Cover Tagger Game, contributing to which helps with the site’s tag cloud, and other games and features on covers and related topics.

There’s more here, but I don’t have time to cover it all.