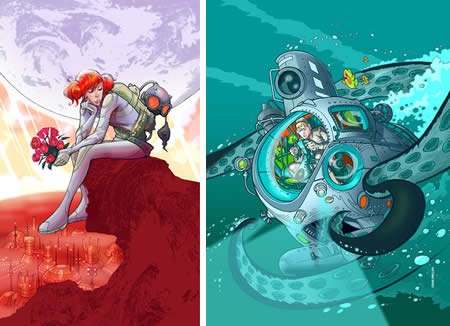 So I was on Netdiver (see yesterday’s post) and who comes up as the first illustrator on the first page in the Illustration category but Craig Phillips, a terrific illustrator from New South Wales in Australia.

Phillips works in a pleasing line and color style that carries some of the fresh, open feeling of European comic art. He uses a bright color palette, often punched up with complimentaries and sharp value contrasts.

I was particularly struck by his series of covers for a new Tom Swift Series (image above, right). Tom Swift is a juvenile adventure character, in existence in one form or another since the early part of the 20th Century, whose stories focused on his prowess as a boy genius inventor and whose books had wonderful titles like Tom Swift and His Triphibian Atomicar or Tom Swift and his Ultrasonic Cycloplane. Great stuff for 12 year old proto-geeks. Nice to see them being continued as a new series, and with great covers from Phillips to boot.

The Tom Swift covers are for Simon and Schuster. Some of Phillips’ other clients include Penguin, TOR, Wizards of the Coast, SPIN magazine, Rolling Stone and Oxford University Press. He’s also created rock posters for groups like Queens of the Stone Age, The Hives and Foo Fighters.

His web site galleries include covers, editorial illustration, black and white book interiors, promotional and personal work, including pages from a self-published comic book called Finch. I can’t give you direct links because the site (for reasons, as usual, that are beyond my comprehension) is in frames.

Don’t miss the subtle “next” buttons at the bottom right of the initial gallery pages that lead to more images.