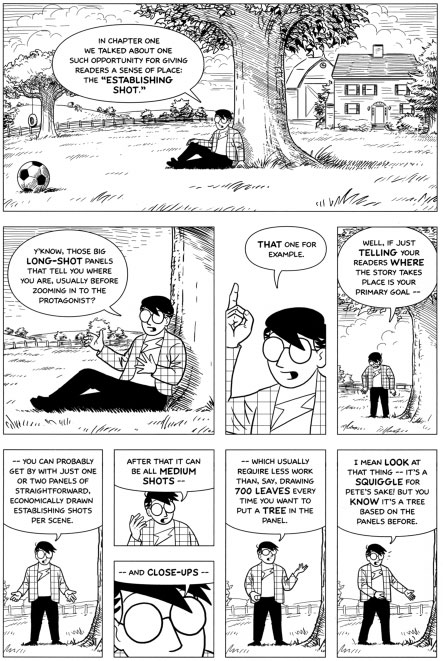 It’s often mentioned that comics, or “graphic storytelling” is the only art form in which words and pictures are blended together in an integral way to tell a story. I also like to point out that comics is the only visual medium (compared, for example, to film or video) in which the reader/viewer can choose to alter the element of time. Yes authors in both prose and comics can exert control over how quickly the flow of a story progresses, but readers can choose to read more or less slowly, or whether to linger over a particular passage, which is very unlike film or video.

As such, comics represents a unique nexus of various story-telling techniques, sharing much in common with both film and prose. Comics is not just a unique medium of expression, it is essentially a different kind of language (regardless of the cultural language of any incorporated test), and has its own system of visual grammar.

This is a rarely explored topic, and most comics artists learn it through emulation or study of existing work, advice from more seasoned comics artists, and occasionally through formal classes.

Most how-to books on the subject creating comics concentrate on how to draw dramatic superheroes, watery-eyed manga babes or cool bots, and/or on drawing tools, pencils, inks, coloring and reproduction, or how to “break into the biz” of professional comics. Little thought is given to the real objective of telling a story in words and pictures.

Who better to fill that gap that Scott McCloud, who has probably given more thought to the nature of comics and comics storytelling than anyone, with the possible exception of Will Eisner.

McCloud’s latest book Making Comics: Storytelling Secrets of Comics, Manga and Graphic Novels is part how-to manual on understanding and using that language; and part continuation of his series of treatises on the nature of comics as a medium. These started with the classic Understanding Comics: The Invisible Art, followed by the less well received (and possibly misunderstood) Reinventing Comics: How Imagination and Technology Are Revolutionizing an Art Form.

Though it covers some of the more familiar territory of tools and techniques, drawing expressions and composing dramatic panels, the majority of Making Comics is about the actual language of comics, and how to use it effectively. A good alternate title for Making Comics might be Comics, the Missing Manual.

McCloud covers a range of topics that anyone involved in creating comics needs to know, and anyone who enjoys reading comics would find interesting and enlightening.

He explains the logic behind establishing shots, medium shots and close ups (so similar to film, see the image above), choice of words and flow of the story (so similar to prose) and things unique to comics like choosing panel arrangements, placing word balloons, using sound effects, balancing the marriage of words and text (in terms of which is used to convey what); as well as skill in the placement of figures in a panel to convey relationships and keep the reader/viewer correctly oriented in the imaginary physical space in which the story unfolds.

All of this extraordinarily well though out analysis of the medium, which amounts to a definitive St. Martin’s Handbook for comics, is imparted in a breezy, informal style, peppered with humor and conveyed through the medium of comics itself.

The book is set up to some extent as if intended to be used as a textbook, and well it should be. Anyone interested in creating comics would do well to study this book.

If you are serious, supplement it with Understanding Comics and two books by Will Eisner, one of the all time masters of the medium, Graphic Storytelling and Comics & Sequential Art. (Having books on comics storytelling by Eisner is a bit like having painting manuals from Rembrandt or Sargent.)

There is a Making Comics page on McCloud’s site devoted to the book, but it is oddly lacking in the description, excerpts, and promotional material expected of a web site presence for a book. It concentrates more on the fascinating promotional tour McCloud and his family undertook of all 50 US states (which I wrote about in December of 2006), including a dedicated blog and podcasts from the road, as well as “Winterviews”, in which McCloud’s young daughter interviews comics creators they encounterd on the tour. There is, however, an “online chapter” of the book, Chapter 5 ½, in which McCloud discusses webcomics in their natural environment and in color.

For better descriptions of the book itself, I’ll have to send you to some of the other reviews I’ve listed below. The best thing, of course, is to stop by the bookstore and take a look for yourself. You don’t get a feeling for a book like this without seeing it (sorry, no audio books commute for this one).

For those just interested in the medium, McCloud continues to surprise and delight with his keen observations and inventive expositions. For those creating comics, particularly those who are just learning their craft, Making Comics is an essential read.

I don’t even think McCloud himself is aware of something else he has accomplished with the three books in this series (forest for the trees and all that). In using his own considerable skills as a comics storyteller to explain the complexities and subtleties of this unique art form, McCloud has refined the language of comics as an informational medium to a previously unknown level.

This may seem a smaller thing than it is, but, just as in the best comics stories, the combination of words and pictures that is comics can convey ideas in ways that words or pictures alone, or words simply illustrated with pictures, could not. All three of these graphic expositions (can’t call ’em novels) demonstrate that potential like nothing I’ve ever seen.

McCloud has refined this skill to the point where it is simultaneously as subtle as an essay, as informative as an illustrated book and as entertaining as, well, comics.