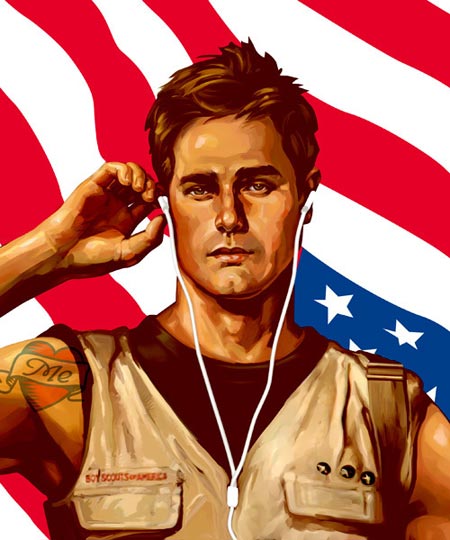 Back in the mid-90’s, when the web was maybe 1/1000th of it’s current size, and digital art was in its infancy, I saw an image in a magazine (I think it was an illustration issue of Communication Arts) that grabbed my attention. It was a portrait image. It looked painterly, but with flat colors arranged into tonal areas, and had something of the feeling of gouache, but not quite.

The description of the image said the medium was digital (something still relatively rare at the time) and listed the software as an application called “Painter”. I had just started swimming in the digital art waters of Photoshop 2.5 and though I had seen plenty of digital art at by that time, most of which looked like identifiable “computer art”, this was my first exposure to “digital painting” (the use of digital tools and a pressure sensitive stylus to “paint” in manner analogous to traditional media).

I wasn’t familiar with Painter (at the time produced by Fractal Design), but that image was enough for me to say that whatever “Painter” is, I want it. Since then I’ve used it extensively, both for digital painting and to draw my webcomic.

Painter, currently owned by Corel, is a now a familiar application for most digital artists.

The image that introduced me to digital painting was by illustrator Nancy Stahl, who is still know for her exemplary work in Painter, though she has said that her clients tend to prefer her digital work in Illustrator; not so much because of the look, but because it’s easier for art directors to ask for changes (which some of them just love to do) with pieces created in vectors.

Her work is familiar to many digital artists through inclusion in numerous how-to books, including the Illustrator CS Visual Quickstart Guide, the Painter WOW Books and the Illustrator WOW Books. She has also been included in Roling Stone: The Illustrated Portraits, Walt Reed’s Illustrators in America and the Society of Illustrators’ touring exhibit Women Illustrators Past and Present.

Stahl’s boldly graphic images, whether painterly or rendered in vectors, have a terrific sense of color and design, and are textbook examples of how to see and isolate the geometric forms produced by volume, light and shadow. Hidden planes reveal themselves, and people, objects and landscapes shift between representational images and pure design.

Her illustrations sometimes have a retro feeling, harkening back to the poster and advertising art of the 30’s and 40’s. Her interests extend to textiles and crafts and her portfolio includes a section of knitted and embroidered images used as illustration. Stahl has also created five stamps for the U.S. Postal Service.

I’ve wanted to write a post on her work for some time, but was put off by her personal web site, in which the images were (and still are) so small as to be essentially pointless. She now has a portfolio site, however, on Illoz, and a portfolio on Workbook, in which there is a selection of images large enough to get a feeling for the appeal of her work. Her personal site still has some useful links to other info about her work. There is also a section of links on the Illoz site.

She also now has a blog on Drawger, in which her work is reproduced in much better detail than anywhere else and which includes discussions of her process.

She has a new book (one of those ones with a little painting kit included) called Real Art!: The Paint by Number Book & Kit (with Douglas Brenner).

Stahl is currently on the faculty of the Hartford Art School Limited Residency MFA in Illustration program.