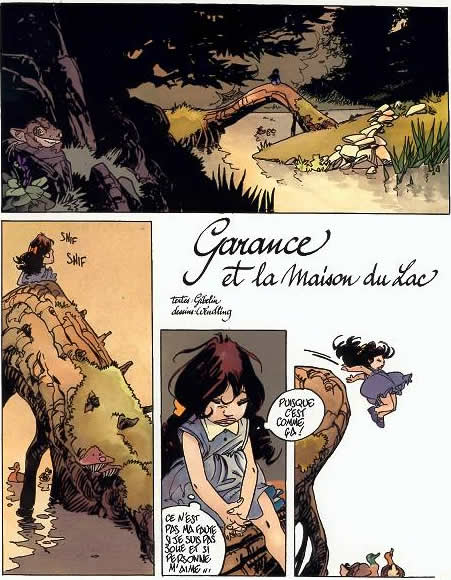 Claire Wendling is a French comics artist, illustrator and cover artist who made a quick impact when she arrived on the scene. She won the “Alph’Art Avenir” prize while still her third year at the École des Beaux-Arts in Angouleme, and the next year began the comics series Les Lumiéres de l’Amelou with writer Christophe Gibelin. The first volume of that series won the critics’ prize and she received the best young illustrator prize two years later for her magazine covers for Player One. The following year she started Garance, a comics story serialized in the magazine Schtroumpf (image above).

Along the way she has picked up a range of influences. I see the elements of Frank Frazetta and Roy Krenkel and Jeff Jones, some Manga/Anime artists, French comics artists like Giraud and Valerian, Disney style animation artists and Art Nouveau artists and Symbolists like Mucha and Ergon Schiele.

Her own site is in French, but not hard to navigate; though I can’t give you direct links because the site is in frames. The Galleries are divided into sections like “Albums (“graphic novels”) and Portfolios”, “Lithos & Affiches” (prints and posters), “Ex-libris & Marque” (book plates), and “Dessins (dreawings) & Animation”. Within those are often subsections that contain numerous (if somewhat small) examples of her work.

There is also a gallery of Wendling’s work here on the site of one of her publishers. You can get a quick overview of her work, as well as a look at some of the publications of her work that are available as imports here in U.S. on the Stuart Ng Books site (he caries a lot of imported comics and related material).