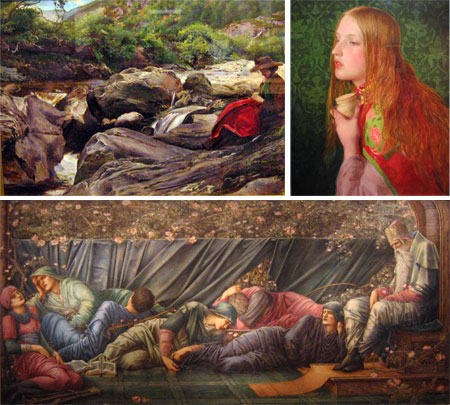 Perhaps, like me, you grew up frequenting an art museum in your area and have come to think of some of the works there as familiar “friends”, that you visit periodically; and, just like actual friends, you would miss them if they go away away, on loan to other museums.

I had the good fortune of growing up with a remarkable small museum, the Delaware Art Museum; which, in addition to being founded on a large collection of Howard Pyle’s work and serving as a focal point for the art of the Brandywine School of illustrators, has other treasures; notably the Samuel and Mary R. Bancroft Collection of Pre-Raphaelite Art; the largest collection of Pre-Raphaelite Art outside of England. The latter contains some of the “friends” I’ve been missing for the past two years, as the collection made a tour of museums across the U.S., and I’ve gotten to visit them on their recent return to Delaware.

Formed in the middle of the 19th Century, The Pre-Raphaelite Brotherhood were a group of young English painters, sculptors, writers and poets who declared themselves in revolt against the Royal Academy of Arts, the arbiter of acceptability in English art at the time (somewhat comparable to the influence of the Académie des Beaux-Arts and the Salon in France).

The group was initially a secret society. Formed by a trio of painters, William Holman Hunt, Dante Gabriel Rossetti and John Everett Millais, the Brotherhood rejected the art of the Academy, particularly that of its President, Sir Joshua Reynolds, who they referred to as “Sir Sloshua” in reference to his loose brushwork. They objected to the dark colors, rigid definition of acceptable subject matter and insistence on idealizing and “beautifying” imperfect reality required by the Academy’s ruling body.

They essentially rejected all art “after Raphael”, which they considered formularized and enslaved by conventions that left it devoid of real life. Led by painter and romantic poet Dante Rosetti, they looked to the art of the Renaissance for bright color and fidelity to nature, and declared their own aims, as codified by Rossetti’s brother, William:

I. To have genuine ideas to express
II. To study nature attentively, so as to know how to express them
III. To sympathize with what is direct and serious heartfelt and in in previous art, to the exclusion of what is conventional and self-parading and learned by rote, and
IV. Most indispensable of all, to produce thoroughly good pictures and statues

They saw in art before Raphael a truer vision of nature, and a reflection of their romantic ideals. They were perhaps naive, and not all that familiar with the actual history of art, but their youthful bravado would carry them further than they imagined and change the direction of Victorian art.

The only outside indication of the Brotherhood at first was their addition of an enigmatic “P.R.B.” to the signatures on their paintings. It was only after two years that the significance of the initials was revealed, amid harsh treatment by the press, including Charles Dickens, and harsher reaction by the Royal Academy. Young painters don’t “reject” the Royal Academy, the Royal Academy rejects young painters. But the public notoriety actually served them well, attracting them more attention than any other group of painters at the time. Well-respected art critic John Ruskin came to their defense (and became part of their circle) and their work became more accepted and eventually very influential.

They could have used the influence of a friendly critic in the years afterward, however, as their work became reviled by modernists (along with most 19th Century academic painting) as facile, shallow and unforgivably literary. They took as their subjects passages from the Bible, greek and Roman mythology and great literature, Shakespeare being a favorite. This brought them into kinship with the great illustrators of the time (giving the Delaware Art Museum’s collection of Pyle and his students a wonderful extended context). Of course, association with the “non-art” of illustration made them even less acceptable among modernist critics, whose malevolent influence on the acceptability of representational art is only beginning to subside in the last decade or so.

In addition to conflict with accepted conventions and public notoriety, the Pre-Raphaelite’s stories are rife with the stuff of legend, or tabloid scandal; like the classic romantic triangle between Millais, Ruskin and Ruskin’s wife Effie; and the tragic death of Rosetti’s beloved Elizabeth Siddall after exposure to prolonged immersion in cold water as she posed in a tin tub for weeks on end for Millais’s Ophelia.

Interest in the Pre-Raphaelites has undergone a significant revival in recent years, both among art patrons and artists, and particularly among contemporary fantasy illustrators and concept artists; who find inspiration in their uncanny ability to take the dreams of literary worlds and make them shimmer with the light, color and details of their devotion to the ideals of representational naturalism.

Many of the Pre-Raphaelite painters are represented in the Bancroft collection; and, though you won’t find many of their most famous works, (check the Tate and Birmingham Museum in England for that), the collection contains some beautiful gems that have rewarded repeated visits over the years with the rich detail, luminescent color and beautiful paint handling of Holman-Hunt, Millais, Byrne-Jones, Albert Moore and others.

The Tate Gallery in London is currently showing an exhibit of Millais (until 13 January, 2008), including his famous Ophellia. It then travels to Amsterdam and two venues in Japan.

(The images above are just crops of my digital snaps, taken through glass in room lighting, of pieces in the Bancroft Collection. From top, left: Millais, Sandys, Byrne-Jones.)

3 Replies to “The Pre-Raphaelites”