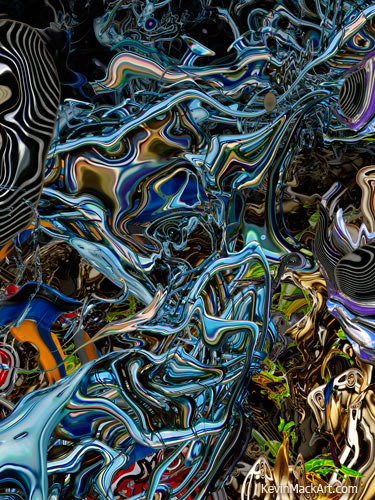 Kevin Mack’s digital compositions are like a roller coaster for your eyes.

You glide into them on big swooping forms that recede into the depths, looping and swirling among themselves like the veinous system of an android, or vibrating into a crenulated landscape of primary colors. As you go further into the images (and “into” is the operative word), traceries of liquid strands twist around floating islands of Henry Moore forms, and sinuous wires multi-colored quicksilver explode into blossoms of robotic flowers.

If I seem to be waxing poetic, it’s because Mack’s images are conducive to the kind of dreamlike interpretation and “animals in the clouds” visions that are characteristic of the fantastical landscapes of Max Ernst or Robert Venosa; sort of a hyperdimensional Jackson Pollock on digital steroids, or Yves Tanguy in a blender.

It’s hard for me to look at these and not think of them as digital sculptures, and marvel at how fantastic they would be if they could be made into actual physical objects that you could walk around (or through).

Mack creates his images digitally using mathematical models that are the outgrowth of his work as a film industry concept and matte artist, which led to work in “artifiical life” and rule based systems that can be used to “grow” 3-D CGI forms based on sets of programming criteria.

His work in that area was utilized in films like What Dreams May Come and Fight Club and inspired the development of software that is being used to simulate the growth of biological tissues for virtual stem cell research.

Mack is the child of two Disney artists and studied Fine Art, Illustration and Film at the Art Center College of Design. He is now an Academy Award wining Visual Effects Supervisor and received the Oscar for his work on What Dreams May Come.

His other film credits include Vanilla Sky, Apollo 13, The Fifth Element, Big Fish and A Beautiful Mind.

Mack’s digital pieces are produced as limited edition giclee prints (image above: Neurosymphonic Self Reflection, 36 x 48″ giclee print on canvas). His digital art has been exhibited at The Los Angeles Center for Digital Art, Siggraph, and Sony Pictures Imageworks.