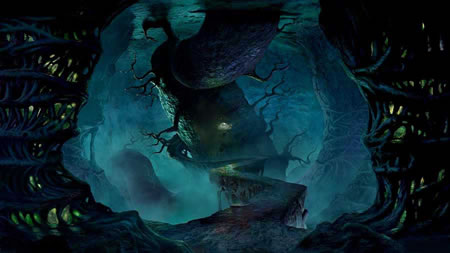 For years Fred Gmbino’s refined, confidently rendered and highly accomplished paintings have been gracing the covers of science fiction and fantasy books, as well as serving the needs of clients like National Geographic, Scientific American, Der Speigel, Lego, Mattel and The US Postal Service.

Over that time his approach has changed, from oil to acrylic to airbrush, and then, in the late 90’s, Gambino started to work with GCI imagery and combine it with his more traditional methods, leading to a fusion of the two that gave him more freedom to experiment and allowed a more dramatic approach to perspective and composition.

In 2001 he began working with DNA Productions as a concept artist and matte painter on the Oscar nominated Jimmy Neutron Boy Genius, followed up by work on the visual development of the TV series Project X; and from 2003 to 2006, he created production art and matte paintings for the feature film The Ant Bully (image above).

Since then he has worked on The Star Beast and Life in a Pickle and is currently Art Director on Escape from Planet Earth from Rainmaker Entertainment; and he continues to find time to create illustrations.

A collection of his work was published as Ground Zero from Paper Tiger. His latest book is Life-Size Dragons; and he is also one of the featured artists in Fantasy Art Masters, which includes details of his working methods.