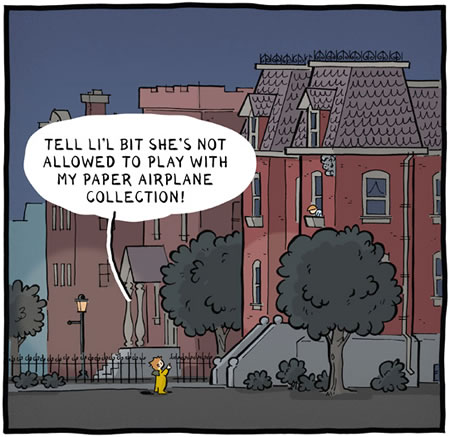 I found myself in a sour mood the other day and in need of some distraction and entertainment that didn’t involve gunshots, car chases, fist fights, explosions, betrayal, murder, infidelity, gratuitous nudity, scandal, deceit, lies and horror.

So I turned off Fox News and looked to the list of web comics that I like to check in on periodically.

Much to my delight I realized that Zip and Li’l Bit, a lighthearted online comic by Trade Loeffler, had progressed well into a new story since I had last visited.

The site is well arranged except that the home page always opens to the most recent page. This is a fairly common paradigm in web comics, but one of which I’m not fond. It’s convenient for current readers who are following along as new pages are added (in the case of Zip and Li’l Bit, Thursdays and Sundays), but can be disconcerting for first time visitors, who are presented with a “walked into the middle of a movie” situation.

The new story is up to page 19 as of yesterday, and the young brother and sister protagonists are accompanied this time by a couple of new characters, notably Zip’s shadow and Willoughby, a talking stone lion on a cornice of their house.

Closer inspection is conveniently provided using one of the site’s great “only on the web” features. Clicking on any of the panels produces a pop-up enlargement of the panel in which you can see it in detail. This works particularly well in Loeffler’s chosen format of uniform panel shape.

You can click through the enlarged panels with a hidden arrow at the upper right of the panel, until the end of the page. Notice, in the enlarged drawings, the loose but restrained linework in the backgrounds, accented with a bit of texture and a carefully controlled color palette.

Zip and Li’l Bit was originally planned as a print project, and I hope it makes it’s way to print at some point. The strip would charm children at bedtime just as much as adults at their computers.

Link: http://zipandbit.com/
The Upside-down Me
The Sky Kayak