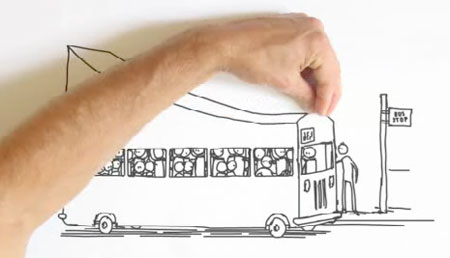 Ever since I first saw Chuck Jones’ wonderfully imaginative and brain-tinglingly loopy Warner Brother’s cartoon Duck Amuck as a kid, I’ve had a weakness for cartoons that break the fourth wall (i.e. the invisible barrier between audience and characters in the entertainment), particularly in the oblique way of having an animated protagonist encounter the animator who is drawing the cartoon in which the character exists.

There’s just something surreal and magical that I find particularly appealing about the whole idea, perhaps the result of my inordinate fondness for Crockett Johnson’s Harold and the Purple Crayon as a child. (As a side note, I understand the Harold and the Purple Crayon books have been made into an animated series for HBO, a situation that only makes me a bit sad, and instills me with no desire whatsoever to see the shows).

I posted in June about a Flash animation by Alan Becker that evokes the same animator/character relationship, and here is another short (one minute) animation that follows that pattern, in this case an ad for V Water.

This one is a bit different, though, in that our animated protagonist is enabled, rather than hindered, by the hands of the animator. Unfortunately I haven’t found creator credits for this one.

[Link via Digg and Drawn!]