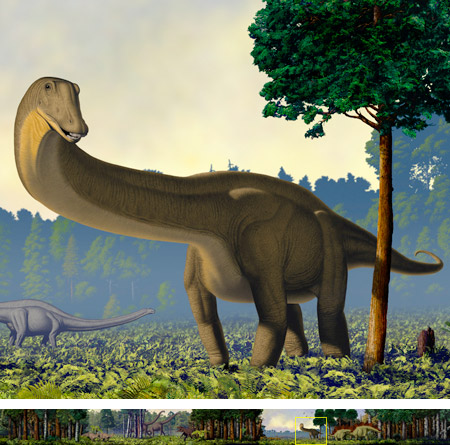 Scientific illustration is sometimes thought of as mundane, but there is an area where it crosses over into subject matter that is more dramatic, bizarre and wild than the most fevered dreams of Surrealist painters, fantasy illustrators or movie concept artists, namely paleo art.

Dinosaurs can capture our imagination like few other aspects of the natural world. Ranging in size from tiny to gargantuan, with an astonishing variety of body shapes, plating, armor, horns, claws and almost unimaginable lengths of neck and tail, these glorious monsters are the dragons of our imaginations, except that they’re real.

When working in an area where reality frequently outdoes imagination, but everything is essentially a matter of educated guesswork, it’s sometimes difficult for artists to walk the line between trying to create accurate representations of these long-gone animals and trying to convey the sense of amazement they can spark in us.

Some paleo artists will let their desire for drama get away from them, and portray improbable scenes like 7 ton tyrannosaurs sprinting like cheetahs or 35 ton brachiosaurs rearing on their hind legs like giant elephants, ideas that stretch the limits of biology, physics and animal anatomy. One of the current fads is to represent all manner of dinosaurs as feathered, whether there is any direct evidence for feathering in that species or not.

The best reconstructions of long extinct species are just that, rigorous scientific reconstructions based on the physical data of fossilized bone, animal trackways and other evidence in the fossil record, combined with a thorough working knowledge of existing animal anatomy (plus a little physics, which might give a clue about how unlikely the above scenarios are). One of the problems here is that even trained paleontologists themselves are seldom anatomists, their training is in the study of fossils, but not necessarily in the physical anatomy of animals.

One of the major paleo artists that museums, publishers and paleontologists call on when they are most concerned with anatomical accuracy, combined with the artistic skills to make the animals and their environment as exciting and realistic as possible is Robert F. Walters.

Walters combines a keen understanding of animal anatomy, paleontology and natural history with an academic training as an artist. That, plus a flair for displaying scientifically accurate animal reconstructions in dramatic compositions, gives him a superb ability to portray prehistoric life in murals, illustrations and museum displays.

Walters’ background, interestingly enough, included an early career as a widely known science fiction artist. His covers and interior illustrations graced numerous science fiction books and magazines in the 70’s and 80’s. He was noted for his revival of the painstaking pen and ink stipple techniques employed by Virgil Finlay, as well as techniques that came out of his admiration for Joseph Clement Coll, Franklin Booth and other great pen and ink artists.

Fans of cyberpunk will recognize Walters as the cover artist for the original edition of True Names, the 1981 novella by Vernor Vinge that is generally acknowledged to be the first major work in that genre.

Walters’ fondness for golden age illustration carried over into his work as a paleo artist, with herds of dinosaurs roaming through landscapes ablaze with with Maxfield Parrish inspired colors.

Walters eventually curtailed his other work in favor of concentrating on dinosaurs as a paleontological life reconstruction artist. Along with his wife, Tess Kissinger, who is also a paleo artist and the author of an industry standard guide to copyright and contracts for dinosaur artists, he now heads a studio of paleontological artists and sculptors under the name of Walters & Kissinger.

I’ve had the pleasure of knowing Bob since high school, where we found we had a mutual interest in science fiction, comics, Dada and Surrealism, as well as Howard Pyle, N.C. Wyeth and the other great illustrators in the Delaware Art Museum and, of course, dinosaurs. We both also went on to study at the Pennsylvania Academy of the Fine Arts in Philadelphia, though at slightly different times.

Walters’ clients as a paleontological artist include The Smithsonian, The American Museum of Natural History, The Academy of Natural Sciences, Universal Studios, The National Aquarium, The Royal Tyrell Museum, The Discovery Channel and a long list of other notable museums, publishers and entertainment production companies.

Walters & Kissinger’s latest project has been their participation in the new installation and complete renovation of the dinosaur exhibits at the Carnegie Museum of Natural History, for which they have just finished the world’s largest dinosaur mural.

The mural is 15 feet high and 179 feet long (4.5m x 54m), wrapping around two walls of the gallery, a scale which allowed the portrayal of both giant dinosaurs and tiny mammals. The studio also created 100 illustrations and two additional murals for the exhibit. (You can read a news release here.) The mural was just awarded the prestigious Lanzendorf prize for 2-dimensional art by the Society of Vertebrate Paleontologists.

Like most modern large scale murals, this one was painted digitally and transferred to the walls by photomechanical process. Walters was one of the first paleontological artists to make the transition to digital painting. He paints with a Wacom tablet in Photoshop; in the case of large scale murals like this, producing enormous high-resolution files that tax the capabilities of high-end desktop computers. The image above, showing Diplodocus carnegii in all his 90 foot glory, is a crop from one section of the Carnegie mural. I’ve indicated the position of the crop on a representation of the whole mural at bottom.

You can see the entire mural as a scrolling animation on the home page of the Walters & Kissinger web site at dinoart.com. You can also see more detailed images from the mural here, and in a slide show on this page. There is also a gallery of older work on the site. Unfortunately the images there are much smaller. Even in larger images on the web, it can be difficult to get an appreciation for the details in texture, shading and color that go into his paintings.

If you have the chance, of course, the best way to see Walters’ striking paintings of prehistoric animals is to see something like the world’s largest dinosaur mural in person. If you’re not in Pittsburgh, check with the natural history museum near you; he has done work for a large number of museums around the U.S. and internationally.

Walters has also illustrated and painted covers for numerous dinosaur books, including the Jurassic Park Institute Dinosaur Field Guide, The Complete Dinosaur and the Big Book of Dinosaurs (which, at the surprising price of $10 for a large scale full-color book of dinosaur art, is probably one of the best introductions to his work).