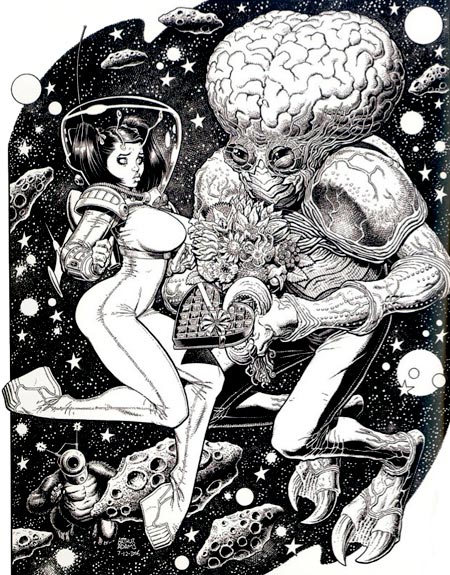 Art Adams first grabbed the attention of comic art fans with his work on the Marvel Comics’ mini-series Long Shot in the mid-80’s. He went on to work on major titles like X-Men and Fantastic Four for Marvel, as well as numerous titles for the other major American comic book publishers. In particular, he became know for his striking cover art, and developed an avid fan following.

He was a co-founder of the Dark Horse Comics creator owned line “Legend”, where his Monkeyman and O’Brien feature ran as a back-up to Mike Mignola’s initial Hellboy mini-series. He co-created the Jonni Future series in Tom Strong’s Terrific Tales with writer Alan Moore.

Adams’ distinctive style combines intricate drawing, detailed rendering, and a light, cartoony touch that makes his work a cherry-topped ice cream treat for they eyes. He has a fondness for movie monsters, pulp science fiction subjects and a raft of pop culture influences that add up to a wonderfully fun visual toybox.

As snappy as his work looks in color, in particular on his many comic book covers, I’m particularly fond of it in its black and white “inks” state, where his penchant for spotting blacks and adding textures and hatching make for a rich pen and ink drawing meets superhero comics feeling.

As far as I can determine, Adams doesn’t have an official web presence. Fortunately, as a fan favorite, there are many unofficial galleries and pages devoted to his work, the most extensive of which is probably the 13-page gallery on Comic Art Community.

Some of his work was collected as a volume of the Modern Masters series devoted to contemporary comic book artists: Modern Masters, Vol. 6: Arthur Adams.

The image above is from his Sampler V, as reprinted in the recent Spectrum 14 collection (borrowed from Li-An’s post on the topic).

One Reply to “Arthur Adams”