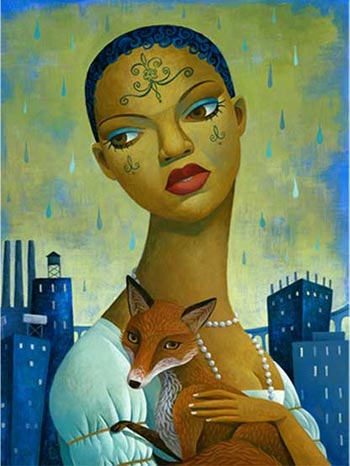 Canadian illustrator Jody Hegwell’s illustrations seem almost constructed rather than simply painted, with subtle granular textures applied to curved sheets of delicately modeled color, which in turn are set into compositions in which the positive and negative spaces interlock like pieces of a puzzle, all set on a bedrock of solid cubist geometry.

Her forceful arrangements of figures and background de-empahsize value and color contrast in favor of the iconic weight of forms in which the geometry of individual shapes is predominant.

Color seems to play a supporting role, adding emotional depth to the intensity of the images, and her work carries strong echos of Picasso, Modigliani and Rousseau.

Hegwell’s client list includes Rolling Stone, Entertainment Weekly, The Grammy Awards, Random House, Simon & Schuster, and Time-Warner. Her work has been featured in Communication Arts, Print Magazine, and Spectrum; and she has received awards from The Society of Illustrators, Spectrum, and The Design Club of Canada. She has also created a number of posters, some of which are in the Permanent Poster Collection of the Library of Congress.

Hewgill works in acrylic on gessoed board. On initial entry, her web site is divided into two separate sub-sites, for illustration and gallery art, though there is some cross-over.

Unfortunately, both sites are hampered by unnecessary pop-ups, roll-overs and browser resizing scripts, but it’s worth the effort to view her work.

You can also see her work in portfolios on illoz, and on the group portfolio/blog site Picture Mechanics.

One Reply to “Jody Hewgill”