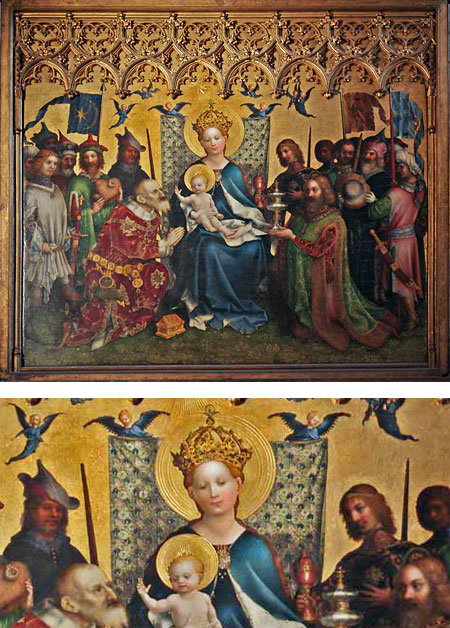 At over 8 ft by 6 ft (260cm x 185cm), this central panel of a triptych for the Altarpiece for the Saints of Cologne presented viewers with an almost life size tableau of the classic Biblical scene (large version here). It was painted in the 1440’s by the late Gothic German painter Stefan Lochner, also known as Stephan Lochner or Stephen Lochner.

Lochner combines the German Gothic style with influences from the Flemish painters of his time, presenting a scene with strong naturalistic elements, brilliant colors and intense focus on detail. The kings and attendant figures are all dressed in modern (for the time) clothing, rendered with great attention to the nature of the rich fabrics, along with the detailed armor of the knights and the intricate decoration of the gifts. Lochner also devotes attention to the individual likenesses of the supporting cast (presumably of the town’s elders and wealthy).

The Madonna, her head weighted with a pretty hefty and earthly looking crown, is surrounded by dark flying figures that might at first seem oddly bat-like, but are in fact angels, painted with Lochner’s signature stunning ultramarine blue. This pigment was made from powdered lapis lazuli, an intensely blue semi-precious stone that was at the time even more precious then the pure gold Lochner used for the background. (Modern ultramarine blue, called French ultramarine, uses a synthetic pigment discovered in the 19th Century.)

The angels are also unusual in that they are “bodiless”, their blonde heads and childlike arms depicted as solid, but their remaining figures mere wisps of suggested motion.

Lochner may have absorbed influences from elsewhere; scholars suggest that his command of perspective in some images was far enough ahead of his contemporaries in Germany that he must have been exposed to the new developments in perspective that were coming out of Italy at the time.

In his Adoration, however, we are still given a scene that is on that edge where decorative devotional art meets naturalistic rendering, to remarkable effect.

Lochner intended that we, like the Magi, be stunned by the beauty of the moment.

4 Replies to “Adoration of the Magi by Stefan Lochner”