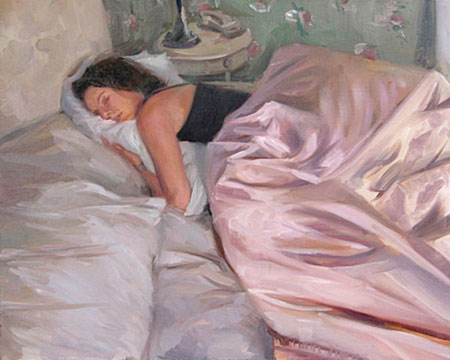 Jason Waskey is an Seattle based artist who has applied his talents in several areas of artistic endeavor. He has been in turns a freelance illustrator, art director for a newspaper and a comic book company, instructor for the Art Institute of Seattle, comic book artist, painter and gallery artist; and is currently an art director for The Giant Software Company That Must Not Be Named.

Somehow, his finds time to paint almost every day and post small paintings on his blog, much in keeping with the manner of many “painting a day” painters. These small works are of small common objects and have that un-fussed with quality of quickly done paintings that are an immediate response to the subject. He also writes a bit about the subject and the painting process and occasionally about other topics as well. Of particular interest on his blog are the posts linked in the right-hand column under the heading of “On Inspiration and Influence”.

In addition to the small works featured on the blog, you can see some of his more finished gallery works in the gallery section of his web site. These are often of figures in interiors. They are open, painterly and, to my eye, seem inspired by “American impressionists” like Sargent, Hassem and Tarbell as well as the more obvious influence of Hopper. His interiors are sometimes of airy, window-lit spaces and at other times of the subdued low contrast tones of indirect interior lighting.

There is a pop-up gallery of “small paintings for sale“, reflecting the smaller works featured on the blog.

There is also a “what’s on the easel now” section that is not updated nearly as frequently as the blog, but features a number of step-by-step progressions through the painting process, as well as notes on the creation of larger works.

In addition there is a “photos” section that includes photos of his palette and working setup; as well as a “links” section with links to artists, blogs and other resources of interest.

He also has one of those excellent sketchbook posts in which real sketchbook pages (possibly Moleskine) are posted as they look, rather than as carefully selected sketches out of context. (I can’t give you direct links to the web site sections because the site in in frames.)

Waskey is represented by the dezart one gallery in Palm Springs.

One Reply to “Jason Waskey”