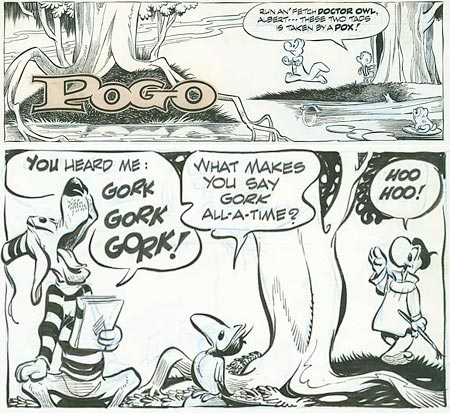 “We have met the enemy and he is us.”

Walt Kelley’s revision of an 1813 quote from Commodore Perry (“We have met the enemy, and they are ours”), and his famous reworking of a classic Christmas song as “Deck the Halls with Boston Charlie”, may actually be familiar to a larger number of people than Kelly’s masterwork of the comics art form, Pogo, which is downright unfortunate.

Walt Kelly was one of the all time great cartoonists. Pogo, his beautifully drawn, keenly intelligent, highly witty and politically daring syndicated comic strip ran for a quarter of a century. Amid hilarious funny animal hijinks, wonderfully loopy wordplay, and multi-leveled stories set in the Okefenokee Swamp (Georgia side), Kelly’s characters mouthed some biting social and political commentary, even to the point of taking shots at “Communist under every bed” witch-hunter Senator Joseph McCarthy, who he portrayed as a gun-toting wildcat named “Simple J. Malarkey”. McCarthy’s “if you aren’t with us, you’re a Communist” tactics had given him considerable power, enough to ruin numerous careers in Hollywood and elsewhere, and taking him on took some nerve.

Kelly also took on the far right-wing John Birch Society, J. Edgar Hoover, John Mitchell and Spiro Agnew and, during the 1968 presidential campaign, he ridiculed the group of hopeful presidential nominees he called the “wind-up candidates”, including Eugene McCarthy, Richard Nixon, Hubert Humphrey, George wallace and Robert F. Kennedy. In 1952, Pogo himself became the possum of choice with a gag candidacy based around “I Go Pogo” buttons (lampooning Eisenhower’s “I Like Ike” campaign slogan).

Pogo can be read as a simple, and simply delightful, “funny animal” strip if you prefer, and kids love it as much as adults. It is one of the best drawn newspaper comics ever, owing a good bit to Kelly’s six-year stint working for Walt Disney Productions, during which he worked on such classic animated features as Snow White and the Seven Dwarfs, Fantasia and Dumbo as well as a number of Donald Duck shorts. He also did comic book work for Dell Comics, during which he created the character that would become his life’s work.

Kelly’s Pogo strips are masterpieces of fluid, expressive brush and ink drawing and superb graphic storytelling. His elegant calligraphic brush lines are complimented by the judicious application of hatching and expertly balanced spotting of blacks. Kelly has been tremendously influential on subsequent generations of cartoonists. You can see direct inspiration in Jeff Smith’s beautiful work on Bone in particular.

There are a number of books that have been published over the years and are in various states of availability, including the famously titled We Have Met the Enemy and He is Us. Also out of print but available used is Ten Ever-Lovin Blue Eyed Years with Pogo, which is a good introduction and overview, and reprints some great strips.

Of particular interest, though, is the new series of complete Pogo strips from Fantagraphics, starting with Pogo: The Complete Daily & Sunday Comic Strips Vol. 1: “Into the Wild Blue Wonder”, and continuing with Pogo, Vol 2.

There is an “official” Pogo Possum site, with lots of news, info and links, but not much artwork. There are other sites that fit a similar niche, lots of info, not enough artwork.

The amazing ASIFA-Hollywood Animation Archive comes through again, however, with an article on Walt Kelly’s Pogo that features some absolutely great scans of Walt Kelly original Pogo art courtesy of Mike Fontanelli. There are three high-resolution Pogo Sunday pages, in which you can not only see Kelly’s beautiful brush and ink finishes, but his underlying blue-line pencils as well (click on the images for the larger versions). I’ve had the pleasure of seeing some of Kelly’s originals in person and these scans do a great job of showing the work of this master cartoonist as it actually looks.

In the meanwhile, if someone asks me who I’m supporting in the U.S. presidential primaries, I Go Pogo!.