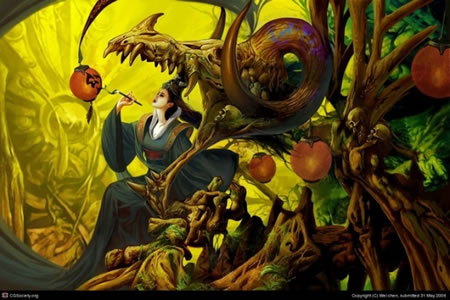 For some reason I haven’t been able to fathom, a lot of artists who work digitally in fantasy art or concept art seem to feel the need to go by pseudonyms, sometimes multiple ones.

Lorland Chen is alternately known as lorlandchain, Lorland Chain, Wei Chain and Wei Chen. I think one of the last two is actually his real name. Take your pick.

Chen is an illustrator from Chengdu China. He is also an instructor at the ChengDu Fine Art Academy.

Chen exhibits a fascinating range of influences. His sometimes intricate and elaborate compositions of fantasy themed works draw on Chinese mythology and history for their subject matter, but are painted in the traditions of Western art. Chen works in both traditional media like watercolor and in digital painting applications like Painter and Photoshop, and sometimes combinations of digital and traditional media.

His figures in flowing robes walk through fantasy palaces or enchanted forests amid great trees that sometimes show the influence classic American illustrators like Maxfield Parrish. There are nods to classical European painting and contemporary fantasy art alike.

His digital paintings are sometimes extensively detailed, giving the impression that Chen was just having so much fun rendering out the intricate bits that he didn’t want to stop.

Chen’s own site, though it has an English version and information about the artist, is difficult to recommend for viewing his work because the images are marred with watermarking. The site also has some technical problems (won’t stop trying to load in Safari) and plays unrequested music (and long time readers know how much I love that). Still, if you like Chen’s work, it’s worth checking out the info about his work and his self-published how-to book.

Fortunately, you can see a number of his images without the annoyance of watermarking on his gallery spaces on deviantArt and CGSociety, which are often accompanied by his comments on the works and his digital painting process.