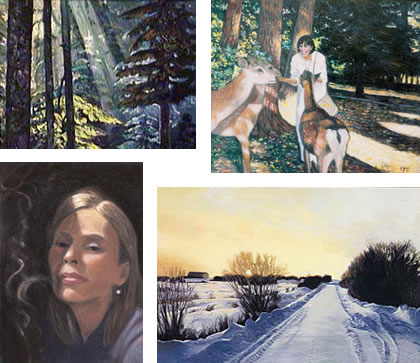 A surprising number of well-known popular musicians, particularly among those who rose to prominence in the 1960’s, went to art school or or majored in visual art in college.

Many of these, and several more latecomers, continue to dabble in painting as celebrity artists, whose work sells primarily because of name recognition. (Someone famous sneezed in this hankie! What am I bid?) Though I have a fondness for John Lennon’s Thurberesque cartoons, most of the rock star art I’ve encountered is pretty lackluster. You can see why most of them seem happy to have left their art school days and unexplored artistic career behind.

There are exceptions, like Ron Wood, and another standout, Joni Mitchell. Mitchell has pursued her role as a painter unflaggingly throughout her musical career, and has been quoted as saying she thinks of herself as a painter who does music more than the other way around.

You can find her work on the covers of many (if not all) of her albums, from the first one on.

Musically, Mitchell was typecast as a “sensitive singer-songwriter”, but she was actually a restless experimenter, gradually moving from folk to rock to jazz and back through, pulling the strands of all of her influences into a new whole. Similarly, she has explored several avenues of visual art over the years.

There is a section of her official web site devoted to her endeavors as a painter. The images are frustratingly small, but you can use the links at page right to browse through her work by year or by style, and then browse in your local music shop to look at some of her actual work as reproduced on her CD covers.

I think she is most successful as a landscape painter, in which she falls into the “painterly realist” school and can have a rich sense of color and tone (something that’s a little hard to tell from the small images on her site). Her figurative work, including many self-portraits, varies more and she seems unabashed about having some of her weaker work posted on the site along with the stronger pieces. Lately she is leaning more toward her occasional forays into manipulated photo-collage, which is my least favorite of her styles.

You can also see her copying from painters she admires, as most artists will do as they continue to learn, including some of the “American Impressionists”, members of the Ashcan School and even Bouguereau.

If anyone comes across a significant number of larger reproductions of her paintings on the web, I would be interested to know. In the meanwhile, even the small images can give you a hint of this artist/musician’s experiments, improvisations and formal compositions, in which she occasionally plays a clunker, but often hits a high note.