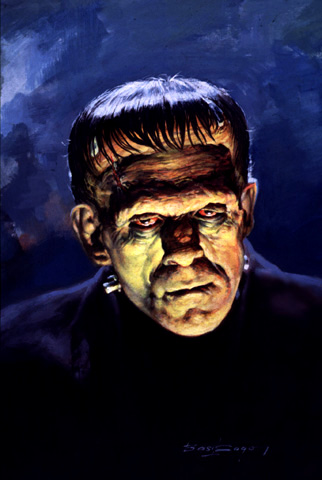 Basil Gogos is a master of monsters.

I tend to think of him as a post-pulp pulp artist. He got to paint wonderfully lurid illustrations of famous movie monsters years after the high-period for pulp art had closed.

His delightfully ghastly portraits of Dracula, The Mummy, The Phantom of the Opera, The Metaluna Mutant, The Wolf Man and dozens of other creatures that crawled out of Hollywood’s “B” movie dungeons in the middle of the 20th Century graced the covers of issue after issue of Famous Monsters of Filmland. Not the least of them was Frankenstein’s monster, who Gogos portrayed numerous times and in a multitude of approaches, from horrific to sympathetic.

Famous Monsters of Filmland was edited by monster expert extraordinaire Forrest J. Ackerman and published by James Warren. Warren also published Creepy and Eerie, black and white comics magazines that featured some of amazing artists like Al Williamson, Wally Wood, Berni Wrightson, Alex Toth and others. Gogos did covers for some of those and a range of other magazines as well.

Gogos studied at The National School of Design, The School of Visual Arts and the Art Students League of New York, where he studied under the renowned illustrator and teacher Frank J. Reilly.

Gogo’s monster images are foot-off-the-brakes, no-color-barred excursions into monsteriffic sensationalism, with wonderful spooky spotlighting, eerie backlighting and great blocks of shadow defining the forms. Glaring colors wash over the looming faces like intense stage lighting, and the characters jump out at you as if screaming “Kid, you better buy this magazine if you want to see more cool stuff like this!”. Wonderful.

Gogos’ creepy creations and eerie evocations of monsters made famous in films have been collected in a new book, Famous Monster Movie Art of Basil Gogos, edited by illustrator Kerry Gammil and J. David Spurlok and with an foreword by Rob Zombie. (Gogos also did some album covers for Rob Zombie, The Misfits and Electric Frankenstein.)

The official Basil Gogos site is pretty minimal and the images are small, there are some larger ones in this page on Gathering Darkness.

Enjoy them…, if you dare!

Addendum, May 19, 2010: Unfortunately, the BasilGogos.com site is now gone. I don’t know of a replacement.