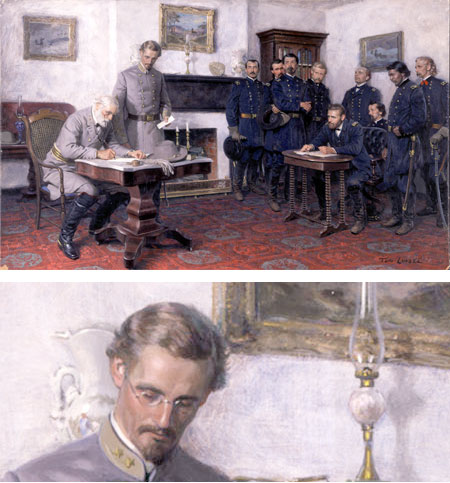 Art can be a time machine, transporting us backward not only with paintings that have survived from the past, but with reconstructions of the past by contemporary artists.

Tom Lovell considered himself “…a storyteller with a brush, a custodian of the past.” Best know as one of the premiere painters of the historical American West, he also created a famous series of paintings of the battles and events of the American Civil War for Life magazine, commemorating the centennial of the war’s end. He also painted other works depicting events from the Civil War, including the painting above, for National Geographic magazine.

Lovell was born in New York and his childhood fascination with the American Indian was fueled by visits to the collections in the Museum of Natural History where he would spend hours sketching the exhibits.

Armed with a fine arts degree from Syracuse University, he became an illustrator for pulp magazines like The Shadow and Wild West Weekly, eventually moving up to better paying assignments for mainstream magazines like Colliers, Cosmopolitan, Time, Life, National Geographic, and others.

In 1944 Lovell enlisted in the U.S. Marines, with the intention of becoming a combat artist, but was instead assigned to Leatherneck Magazine.

In the 1970’s Lovell was commissioned to paint a series of historical paintings portraying events in the Permian Basin in Western Texas for the Abell-Hanger Foundation. These are in the collection of The Petroleum Museum in Midland, Texas.

Lovell has also painted other historical scenes; here is a page with a pencil drawing, color rough and finished painting for The Battle of Hastings.

Lovell remains a very popular Western and historic artist and you will find prints of his work on many of the commercial print services, as well as limited edition prints.

The Art of Tom Lovell: An Invitation to History and Tom Lovell : Storyteller with a Brush are both out of print, but can be found used.

Lovell’s paintings are richly colored, often dramatically composed and filled with the kind of visual textures, details and touches that make a historical scene feel alive.

One of Lovell’s notable illustration clients was National Geographic magazine. Among his commissioned works for the magazine was the painting shown here, Surrender at Appomaomattox, in which the Civil War came to its official end.

This painting is part of a collection of paintings from the National Geographic Archives that will be on display at the Allentown Art Museum in Pennsylvania starting this weekend (more information about that exhibition in tomorrow’s post).

In this image, Lovell’s use of rough scumbling for textures of the walls is in marked contrast to the refined handling of the faces, which are rich with subtle colors.

What strikes me about this painting in particular is the composition. Lee and his military secretary are awash with light in the foreground, appearing dignified and gentlemanly as Lee signs the surrender papers, and commanding the generous space around them. Almost pushed into the corner, Grant and his Union brass form a dark mass in the background. Grant is seated a much less imposing table (perhaps this is historically accurate, I don’t know) and seems to have a troubled expression on his face, as if worried that Lee might change his mind at any second. The other Union officers seem likewise impatient. I don’t know anything about Lovell’s feelings about the role of the two factions in the Civil War; it’s just… interesting.

The interpretation of the past, whether in words or painted images, requires a point of view.