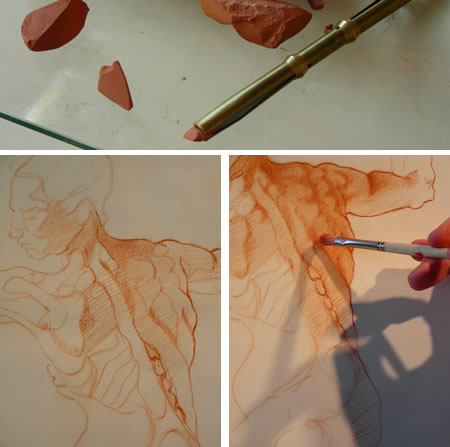 Most artists who have done much life drawing are familiar with sanguine, usually as a color of conté crayon or colored pencil. Not that many, however, have drawn with real sanquine.

Sanguine (Hematite) is a red-brown iron-oxide chalk, usually mined in Italy. It’s color, particularly when used on cream paper with touches of white, makes it wonderfully suited for figure drawing, and it was a staple tool of the old masters.

Sanguine was used widely before the development of conté or modern drawing crayons, which are made from ground pigments mixed with oil emulsion binders; and it allows for a degree of subtlety and control beyond what those convenience chalks offer, provided you’re prepared to deal with it as a “raw” drawing material.

KM Scott Moore has posted a wonderful short tutorial on Drawingboard.org titled Renaissance Style Drawing (Sanguine) — A Tutorial (images above), that goes through the basics of sanguine, from purchase to use, with a series of clear photographs. He shows starting a drawing with rough chunks of the material simply hand held; then, looking almost like tiny flint arrowheads, the chipped pieces of sanguine are set into a holder commonly used for uncased chalks and conté and used for detail work and hatching.

I was aware that sanguine, like the more processed chalks, can be smeared and stomped to create smooth tones; what I didn’t know until reading Moore’s article is that the sanguine dust, because it doesn’t have the oily binders found in the processed crayons, can be mixed with water to form a kind of “ink”, and washed on with a brush or even a pen.

Moore purchased his sanguine from Kremer Pigments in NY, now part of Sinopia. Here is their catalog listing for sanguine “lumps”.

The Cennini Catalog from Studio Products offers “reconstituted” sanguine, a powdered form mixed with Gum Tragacanth (a non-oily binder) to make extruded chalks that handle much like the original, but are less expensive.

Rob Howard, founder of Studio Products, has posted this beautiful sanguine drawing, a copy of a drawing by Hyacinthe Rigaud (more info here).

For many other sanguine drawings, see most old master drawings described as “red chalk” prior to the 1600’s.

The word “sanguine” comes from old French and Latin words meaning bloody or blood colored. The association of reddish faces with a courageous or hopeful disposition in European cultures, as well as it’s part in medieval explanations of physiology involving sanguine “humors“, led to the common use of the word to mean cheerful or optimistic.

Which leaves us with a nice double meaning for “sanguine drawing”.

[Addendum: Apparently, Moore has abandoned the blog that originally supplied the images that accompanied the tutorial and is not actively blogging these days. I don’t know of a replacement or copy of the tutorial mentioned in the post. -Charley (As of June 2010)]