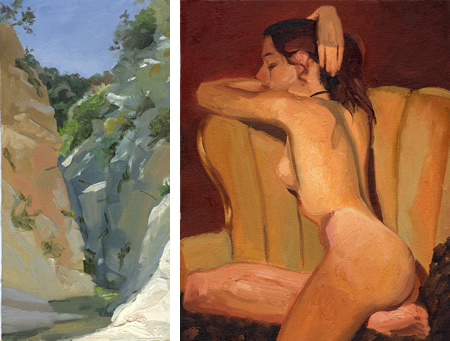 Kevin Turcotte is another of those artists who has a somewhat vague web presence. I don’t think he has a site of his own, but he posts his small paintings as a participant in the group blog, Paintopolis.

He shares Paintopolis with James Martin, Jeremy Engleman and Marty Havran. There is little direct information about any of them on the blog, but I’m guessing that they all work for Disney animation in some capacity, as the one other bit of information I’ve been able to come up with on Turcotte is his IMDB listing; which credits him as background artist or background supervisor on films like Sinbad: Legend of the Seven seas, Spirit: Stallion of the Cimarron, The Road to Eldorado, The Prince of Egypt, Pocahontas, The Lion King and Aladdin.

You’re left with the impression that the blog exists basically for the benefit of the artists themselves and/or their friends, because, except for the artist’s names and a few short notes about the posted images, no background information is provided.

Turcotte seems to be the most prolific contributor, frequently posting small landscapes that he describes as “lunchtime paintings”, quickly realized and fresh with the painterly immediacy that the limited timeframe implies. These are done primarily in oil and occasionally in watercolor. Likewise he often posts both oil and watercolor figure paintings, from appearances done in a classroom or workshop setting. These are also wonderfully painterly and quickly but surely rendered.

There are also quick studies of flowers and still life subjects as well as a few more fully realized paintings.

In browsing through the blog, which unfortunately is one of those Blogger affairs that doesn’t have an “earlier posts” link and requires you to fidget through the archives links to see past the first page, you’ll also encounter the work of his fellow Paintoplois bloggers, whose “off-hours” work is also worth attention, even if they don’t think it’s worth any explanation, bios, or other background information.