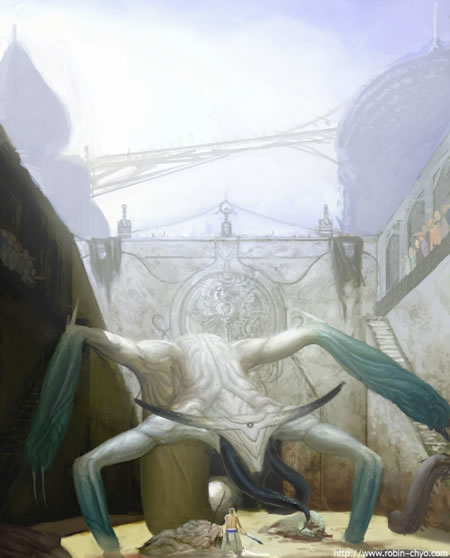 We catch concept artist Robin Chyo at the very beginning of his career. A graduate of Academy of Art University with a BFA in Illustration, Chyo is working to build a career in the gaming and/or film industry as a concept designer and illustrator.

He has begun by establishing a presence in publications like the Spectrum collections of fantastic art (Spectrum 13 and 14, which is where I encountered his work), Ballistic Publishing’s Painter digital art showcase and D’artiste: Concept Art collection, as well as ImagineFX and 2DArtist Magazine.

He has also created a reasonably extensive portfolio, showcasing his abilities in the major areas of concept design for gaming and special effects centric movies, such as characters, environments, props, creatures and mechanical devices.

He has also, wisely, created a web site to make his portfolio readily available. Though it isn’t fancy (probably also a wise decision), he’s done a good job of providing the essentials — bio, resume, contact information and galleries of work that can be viewed by either thumbnails or Previous and Next navigation. He has also added a subtle id mark of his web site address to his images without marring them with ugly watermarks (are you listening, all of you watermarking fanatics?). (I should point out, though, that the “http://” in URL on the image is unnecessary.)

The baseline, of course, is that all of this is in support of very nice work. Chyo’s concept designs show a youthful verve and freedom of imagination that is sometimes more subdued in older veterans in the field. His creatures, in particular, seem more truly alien and less clichéd than most. His mechanical devices, props and character accouterments often have an interestingly organic feeling.

There is a certain brusqueness to his rendering that I find appealing, with an emphasis on textures and a muted palette with highlights of more intense hues.

Chyo lists a number of 2-D and 3-D digital graphics applications in his resume, along with traditional media like pencil, oils and acrylics. It looks like the majority of work in his portfolio is relatively straightforward digital painting in Painter and Photoshop.

All in all, it looks like he’s doing a lot of things right, and it’s probably only a matter of time before we see credits for gaming or film projects on his resume. I just hope that working within industry standards doesn’t take away his imaginative wild streak.