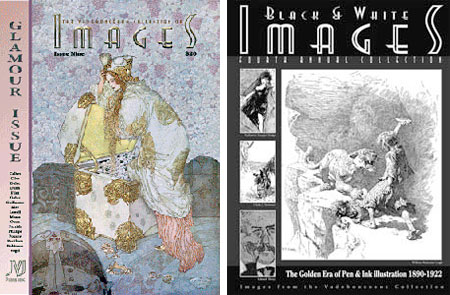 I’ll let you in on a little secret.

Some of you may be under the impression from my posts on the subject that I’m an expert on the field and history of illustration, but that’s not the case. I simply know a little bit about some terrific illustrators that I’ve come across over the years. Compared to a real expert, like Jim Vadeboncoeur Jr., my knowledge is like a creek compared to a river (it might be the Brandywine Creek, but a creek nonetheless).

But that’s not the secret I wanted to let you in on. The secret is The Vadeboncoeur Collection of ImageS, at least it’s more of a secret than it should be (and no, the capital “S” is not a typo, that’s the way it’s written).

Since 2001, Vadeboncoeur has been publishing a periodical, I hesitate to call it a magazine because it defies the conventions of most magazines, featuring beautiful images from some of history’s greatest illustrators, both well known and obscure; as well as work from artists from the same time period as the Golden Age of illustration.

It’s a secret because, unless you frequent BPIB (formerly Bud Plant Illustrated Books), a web resource to which I have occasionally sent you in reference to the history of great illustrators, chances are you haven’t seen the modest link to the ImageS pages.

The web site itself is a little, um… stuck in the 90’s, (when entering the site through the home page, choose “No Frames“, because frames suck), but the heart of the site is a wonderful collection short but of terrific, and often definitive, articles on great illustrators, from Edwin Austin Abbey to Newell Convers Wyeth.

You could spend hours here lost among the articles and (unfortunately somewhat small) images from these greats, but why settle for that when you can get Vadeboncoeur’s beautifully printed collections full of stunning, high-resolution images of works that you just won’t find anywhere else.

These collections, (again, I hesitate to call them magazines, and they’re not quite books) are printed larger than most magazines (9″x12″), are up to 44 pages each; and, in recent issues, feature amazing reproductions by way of Stochastic printing (a process that eliminates the traditional limitation of process dots and looks amazingly like a photograph).

Unfortunately, the web site doesn’t do a very good job of presenting the collections, with a small, too-quick, GIF animations of a few pages, that you can’t even focus on for more than a second, as the only preview.

Vadeboncoeur should take a page from Dan Zimmer’s Illustration Magazine previews, which give a thumbnail of every page in the magazine (see my posts on Illustration Magazine); or, better yet, feature two or three large images to give some idea of how beautiful these pieces really are.

In the meanwhile, lacking better previews, take my word for it. These collections are head-spinningly beautiful and a must-have for any serious fan of Golden Age illustration.

But don’t let too many people in on our little secret, at least not until we get a chance to snap up those back issues.

5 Replies to “The Vadeboncoeur Collection of ImageS”