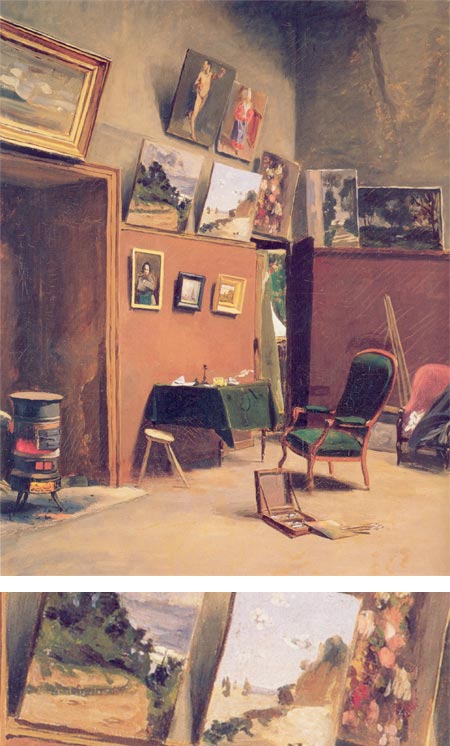 In 1862 the young Bazille, son of a well-off family from Montpelier, whose friends included art patrons who owned paintings by Delacroix that inspired him to study painting, moved to Paris and enrolled in the atelier of Charles Gleyre, where he met some other young art students, notably Claude Monet, Pierre Auguste Renoir and Alfred Sisley.

Gleyre, though traditional in his emphasis on paintings having “meaning” and idealized beauty, as was the norm at the time, was also an advocate of plein air painting, and those four young painters spent many hours painting on location in the Forest of Fontainebleau. (Side notes: Gleyre’s previous students included the American painter James McNeil Whistler. Gleyre himself added watercolor painting to his skills under the tutelage of Richard Parkes Bonington.)

Bazille shared his friends’ enthusiasm for painting from life, and was also very influenced by Edouard Manet, who was a friend to the Impressionists but not one of them, and Gustav Courbet. He developed a loose, bold brushstroke, and in many ways shared the experimental temperament of the early Impressionist circle, but he did not reject the academic subject matter of portraits and figure painting in favor of landscape as they did. His paintings also were regularly accepted at the Salon (as were Manet’s), when the other young Impressionists were turned away; though some of his most modern and ambitious works, like La Toilette were rejected..

Bazille’s large, outdoor scenes of figures in landscapes were notable as the nexus of these influences, and the most famous of them, Family Reunion is interesting to compare to Monet’s abandoned attempt at a similar large-scale tableau, Déjeuner sur l’Herbe (also here and alternate version here).

Though he didn’t consider landscape his forté, Bazille’s landscapes can be wonderful, like his beautiful but unfinished The Terrace at Méric (Oleander), in which you can see the ghostly drawing of a figure that was being blocked into the composition, perhaps after he had considered it finished at one point.

My favorites of Bazille’s paintings, though, are his images of his own studios, Bazzille’s Studio; 9 rue de la Condamine, and in particular, Studio in the rue de Furstenberg (above, with detail). I always enjoy painters’ images of their own (or their fellow artists’), studios. In their direct, painterly realism, Bazille’s studio images remind me of the later studio portrayals of William Merritt Chase and other American painters influenced by the Impressionists.

Bazille was very much a part of the initial development of French Impressionism, but he died before the full flowering of what would come to be known as the Impressionist style.

Most people have the impression (sorry, couldn’t resist), that the revolutionary French painting style bloomed amid tranquil times similar to those in La Belle Epoch, but Napoleon’s war with Prussia, and its aftermath, including the bloody turmoil of the Paris Commune, interrupted its development with a time of terror and strife. Among the tragic losses in that period was the potential remaining lifetime of brilliant painting from Frédéric Bazille.

One Reply to “Jean Frédéric Bazille”