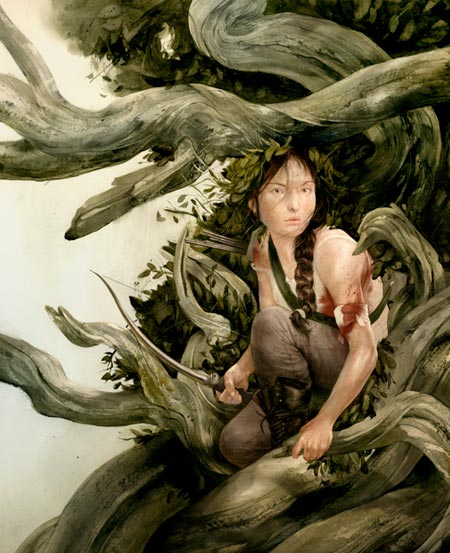 Sam Webber’s sometimes stark, sometimes lush illustrations always feel like they have hidden edge to them. In some ways they feel as though they have just been pulled back from being too edgy in some undefined way, and have been moderately groomed for mainstream acceptability; like a barbarian who has hidden his knives and washed up in order to secure lodging at the inn.

Their sometimes smooth and delicately modeled passages are often contrasted with brusque forms that are dragged and scraped out of rough monochromatic textures. These sometimes have the feeling of marks made with bark dipped in ink, or an ogre’s fingerpaints. The forms he treats this way are usually those of natural elements, like tree limbs or the bodies of animals, that respond well to the suggestion of wildness and rough textures.

He will often work almost monochromatically, leaving a single color, like a pale red or pink, to punctuate the image. His conceptual framing of the illustrations, like the visual character of the drawings, encourages you to slow down, and consider what is presented with a little extra thought.

Weber was born in Alaska, grew up in Ontario and studied at the College of Art and Design in Calgary and the School of Visual Arts in New York.

Weber’s online portfolio contains a number of his professional pieces as well as some personal projects and a sketchbook section.

His work looks to me like it is done with a combination of ink, ink wash and watercolor; and perhaps tree bark and ogre fingers.