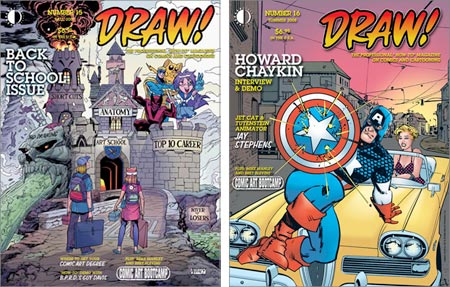 Though its title might suggest a more general interest magazine devoted to drawing, Draw! magazine is focused on topics of relevance to comic book art, animation and related varieties of illustration.

Each issue features how-to articles and tutorials from industry professionals, profiles of artists working in those fields and in-depth interviews.

Draw! is edited by Mike Manley, long time comics veteran who has worked on titles like Batman, Shazam, Darkhawk and numerous other titles for DC, Marvel and Dark Horse, as well as being a storyboard artist and background designer for Walt Disney, MTV, Warner Brothers and the Cartoon Network.

Manley, who is an extreme multi-tasker, is currently back in school going for a degree in painting at the Pennsylvania Academy of the Fine Arts, and also teaches drawing and animation related subjects at the Delaware College of Art and Design (where I teach a class in Adobe Flash). I’ve had the pleasure of knowing Mike for a number of years and he’s also an all-around nice guy (but don’t tell him I said so…). I’ll cover more on Mike’s other accomplishments in a future post.

In recent years Manley has been focusing much of his attention on Draw!, working to make it a focal point for those interested in the skills involved in creating comic book art and animation. He has gotten a long list of industry pros to contribute, and has also formed a core group of regular contributors who give the magazine a solid foundation, including Bret Blevins, Paule Rivoche and Alberto Ruiz.

Draw! is an 80 page magazine, mixing black and white and color pages, and sells for $6.95 U.S. Manley packs it tight with how-to insights and artist profiles from cover to cover. Draw! is published by TwoMorrows publishing, which also publishes other comics related titles like Rough Stuff, Write Now!, Alter Ego and The Jack Kirby Collector.

You can often find Draw! in comic book specialty shops, and larger bookstores. (If your local comics shop or bookstore doesn’t carry it, you might be able to convince them to do so.)

You can also order individual issues and subscriptions from the Draw! website. Unfortunately, the official Draw! web site isn’t well designed or maintained, and does a poor job of showcasing the magazine. (I don’t think Manley has control over the site, I think TwoMorrows is responsible for it, as the TwoMorrows site is poorly designed and arranged as well.) You may get more of a picture of the magazine’s contents from other sources, like Manley’s interview with Alex Horley as reprinted on Newsarama.

The most recent issue of Draw! that I have (#15, Spring, 2008), is a bit of a departure from the usual format. It’s called the “Back to School Issue” and features an overview and in-depth look at the major art and specialty schools in the U.S. that are now offering dedicated courses of study in comics and related arts, including The Joe Kubert School of Cartooning and Graphic Art, The Center for Cartoon Studies, The Minneapolis College of Art and Design, the School of Visual Arts, and the Savannah College of Art and Design.

I think the new issue (#16) is due out soon, but you can still order #15 through the site (even though they mislabel it as “Winter 2008” instead of “Spring 2008”). You can also order downloadable PDF versions of recent issues for $2.95, several collections of the Best of Draw! and Manley’s How to Create Comics From Script to Print in both trade paperback and DVD versions.