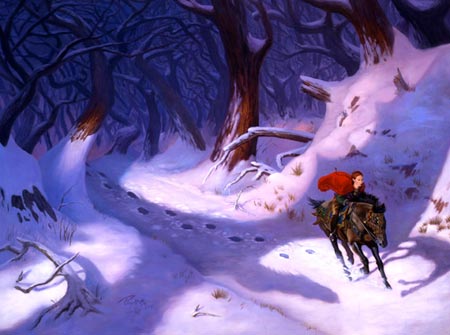 After studying as several colleges, including the School of Visual Arts and the New York Academy of Figurative Art, fantasy artist Alan Pollack decided to focus on illustrations for role playing game companies.

He worked for a while for TSR, the company responsible for Dungeons and Dragons, and has since gone freelance, adding companies like Del-Rey, ROC, Tor Books and Wizards of the Coast to his client list, book covers to his ouevre and science fiction subjects to his subject matter.

His web site galleries include role playing game art, collectable card game art, unpublished art, book covers and available originals. Though he applies his detailed realist style to each genre with equal aplomb, it is the book cover art I find most appealing, particularly in cases where he plays with areas of color as compositional elements, as in the image above, Memory of Fire.

Most of his paintings are in oil on illustration board and are sometimes done at a fairly large size (30″x40″, 76x100cm).

Pollack seems to have a fun sense of the lineage of classic science fiction and fantasy illustration that developed out of pulp illustration of the early to mid 20th Century, and cites his early fascination with somewhat more modern influences such as Frazetta, Boris, the Hildebrandt Brothers and Michael Whelan, and the later discovery of artists like Brom, Keith Parkinson, Robh Ruppel and Donato Giancola.

For me, one of the most appealing factors in Pollack’s work is his sense of fun. You get the impression he is having a blast painting the kind of subjects he grew up fascinated with, and that enthusiasm comes through in the finished paintings.