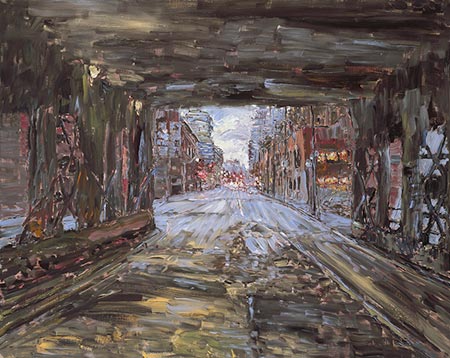 I have to say that I don’t normally respond well to paintings in which representational imagery has been “pushed” stylistically to the point where it borders on being non-representational. Contemporary artists often lose me at that juncture. There seems to be a point where it becomes boring for me, and I seldom follow artists who work in that direction.

Marcon Sassone’s work, however, grabbed my attention and appealed to me right off, even though it fits that description. Sassone’s brusque brushstrokes threaten to break up the representational image, as if it were on the verge of dissolution, but he holds back just enough, and includes enough elements of visual interest in his paintings, that they work both as representations of real scenes and severe abstractions from them (all art being “abstract” in the strict sense of that word).

His urban landscapes, in particular, have a feeling of vibration and almost random energy, within which they still form palpable images of real places.

Sassone was born in Tuscany, Italy, studied at the Instituto Galilei and later with Silvio Loffredo, a professor of art at the Academia i Florence.

He later emigrated to California, though a number of his paintings are from a series of views of Venice. He currently works in Toronto and Florence, and exhibits in the U.S. and Europe.

There is currently an Exhibition of his work at the Odon Wagner Gallery in Toronto, that features a number of his views of that city. It runs from April 4 to April 26, 2008.

The images on the Wagner Gallery site are somewhat larger than those on Sassone’s own site, giving you a better feeling for the texture and surface character of his work.