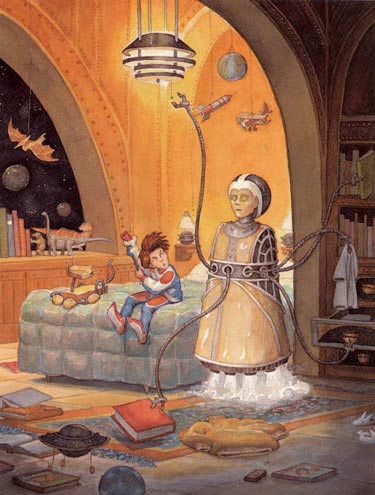 Timothy Brush is a children’s book illustrator originally from Pennsylvania and, after living in Illinois, Ohio and Texas as well as Vienna, Rome and the Greek Islands, is now settled in New York City.

Bush studied literature in college and is self-taught as an artist. He points out (jokingly, I hope) that he is “completely unqualified to do what I do”. Were he serious, I would have to disagree, of course, as I think he is admirably suited to his role as a children’s book illustrator; both because of his delightful illustrations, and because of the way he describes his school visits.

Not only does he take the time to talk to school classes about the process of illustration and the creation of books, he makes a point of showing them that the real world process of being an artist or writer isn’t a fantasy story, and that professional artists have difficulties, setbacks and disappointments, as well as successes, just as kids do. His talks usually include reading aloud and sessions with everyone drawing together.

You can view his online portfolio either by category, such as action, animals, landscape, etc, or by book title. The two viewing paths are only partially redundant, and there are images to be found in both areas that are not repeated in the other.

In referencing his illustrations by book title, my favorites are Grunt! The Primitive Cave Boy and Benjamin McFadden and the Robot Babysitter (image above). These are some of his more detailed illustrations. The former leans more toward adult book illustration, with realistic landscapes as a backdrop for cartoonish characters and nicely rendered prehistoric mammals. The latter is a visual treat, with lots of rich details, textures and fanciful designs. Robot Babysitter has just been optioned as a feature film by Walt Disney Pictures.

I was also struck by his illustrations for Janey and the Famous Author, in which he again blends somewhat stylized characters with realistic backgrounds, in particular nicely rendered watercolor landscapes and architecture. In these, Bush uses texture and lighting in the backgrounds to create an effective emotional tone for particular points in the story.