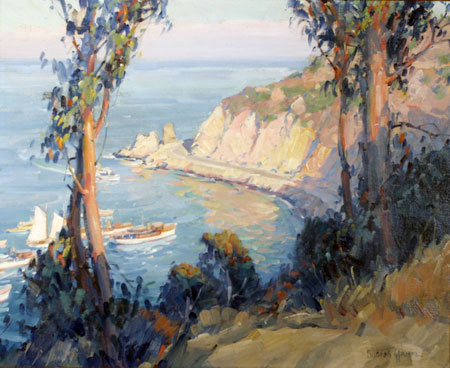 I only became aware of Duncan Gleason when my wife let me know there was an interesting painting being shown on one of those PBS programs about antiques. It was a painting of two kids sitting somewhat precariously on a rock in front of surf on the rocky California coast. It was painterly and colorful in a way that seemed related to the California Impressionist tradition.

I did a little digging and, while I couldn’t find much on his illustration work, I came up with some background and a number of images of his gallery paintings.

Edenhurst Gallery owns the domain name and keeps a small site for DuncanGleason.com (as they do for the names of many historic California painters), but their own gallery has little in the way of images (at least from what I could bring up through their search feature, they seem mostly interested in buying his work and don’t keep an online archive of previously sold works).

The best results I got were from Vallejo Gallery, which has four pages of images (roughly 20 – links at top right of page), as well as a couple more here, along with a short bio. Click through to the page for the individual image and then click again for the large image (or sneak in the back door and look through the image directory for direct links but no thumbnails).

He eventually returned to California and pursued his desire to transition into gallery art, and developed a specialty as a marine painter, with an emphasis on historic sailing ships. He was also an accomplished sailor himself, and a consultant on ship construction, and performed volunteer duty for the Coast Guard during WWII in his own yawl. He the author of two books about the California coast.

Later in his career, he worked as a background and production artist for MGM and Warner Brothers Studios. In addition, he was a championship gymnast and his relationship with the movie studios included work as a stuntman.

There is a monograph on Gleason, Joe Duncan Gleason: Artist, Athlete, Author by Jane Apostol that at is available through John Moran, who also has a nice selection of books on California art, American Art and monographs, with an emphasis on American Impressionism, that are not always easy to find elsewhere.