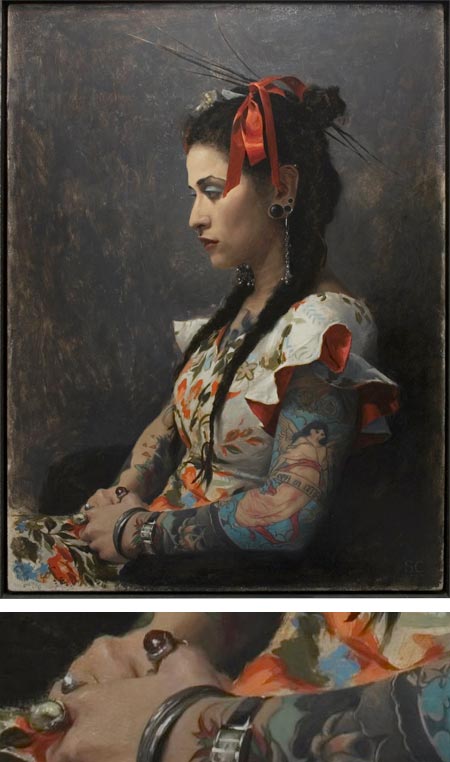 Portrait and figure painter Sean Cheetham is another artist whose own blog and web site tell me virtually nothing about him, other than that I like his work. Perhaps that’s the most important thing, but one might hope for a little additional info.

I was able to come up with some through a little digging. It turns out that Cheetham is a workshop instructor at the Los Angeles Academy of Figurative Art. His short bio there mentions that he has BFA from Art Center College of Design in Pasadena, and has exhibited at the National Portrait Gallery in London, England and at the Mendenhall Sobieski Gallery in Pasadena.

There is also a short bio on the Morseburg Galleries site that additionally features a gallery of his work.

Cheetham’s own site is just a horizontally scrolling page of unfortunately not-very-large images. Fortunately, the ones in the posts on his blog are linked to much larger versions in which you can begin to get a feeling for the painterly qualities of his work.

Cheetham is an accomplished draftsman, and his painting approach shows a debt to academic painting traditions. His portraits are frank, direct portrayals of his subjects, unapologetic and seemingly without comment.

He doesn’t flatter or criticize, focusing unblinkingly on his subjects and their environment. In the latter, he seems attracted to the textures and colors of gritty urban interiors, the rough surfaces of thinly painted walls, chipped formica, scuffed floors and rough cloth.

Some of his portraits are of individuals with tattoos, and I get the impression that the tattoo art is represented with the kind of fidelity that a painter might apply to the portrayal of a famous painting in the background of a portrait set in an art museum gallery.

Cheetham’s work has also been featured in American Artist’s Workshop magazine. The American Artist site has a gallery of his portraits and online versions of the article Sean Cheetham: Using a “Mud Palette” to Achieve Harmony and the short Sean Cheetham: Common Weaknesses in Figure Paintings

There is also speed painting video on YouTube in which he paints a full portrait.

(Note: some images may be NSFW)