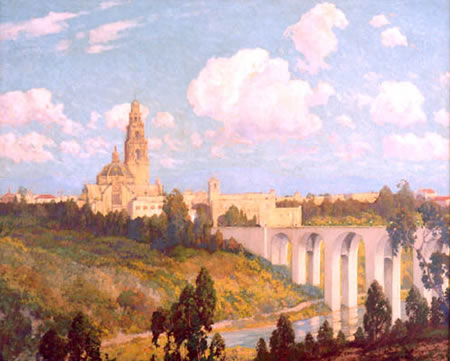 Hungarian born painter Maurice Braun came to the US at the age of four, when his parents moved to New York City.

He demonstrated an interest in art at an early age and was apprenticed to a jeweler at the age of fourteen. On his own, he began to copy works of art from the Metropolitan Museum of Art. He studied at the Academy of Design, and then studied for a year with William Merritt Chase at the school Chase founded (the Chase School, later called the New York School). Braun later traveled to Europe, studying and painting in Hungary, Austria and Germany.

Returning to New York, Braun established himself as a portrait painter, also painting landscapes in New England. He was attracted to the then flowering art scene in California, and moved there in 1910. He was drawn to San Diego by the promise of fresh landscapes, brilliant light, and the presence of a branch of the Theosophical Society, whose tenants were informed by the search for commonality in the spiritual traditions of multiple religions. Braun’s work was informed by his philosophical convictions, and in a way somewhat similar to George Inness, his landscape paintings were intended to be more than a superficial representation of the visual world.

Braun founded the San Diego Academy of Art and served as its director for many years, but continued to travel to the east coast and exhibit there, establishing studios in New York and Connecticut and traveling back and forth at different times of the year.

Though Braun was a dedicated plein air painter, he did his finished works in the studio, and did not believe in limiting himself to a literal representation of the landscape. He welded intense study of the individual characteristics of the San Diego countryside with his own feeling for composition, form and color and produced an interpretation based on those factors and his philosophical convictions.

Braun’s painting technique varied over time as he continued to experiment, but he developed a bright palette, with clear unfussed-with colors and free brushwork.

One Reply to “Maurice Braun”