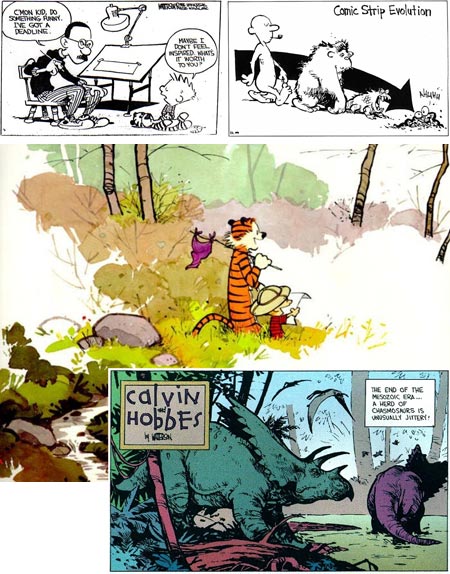 I’m not going to attempt to write an appreciation of Calvin and Hobbes here, I don’t have the time or the room.

I’ll simply say that if, for some bizarre reason, you’re unfamiliar with the greatest comic strip of the last quarter of the 20th Century (and one of the best for that entire century, which which is to say the history of newspaper comics in general), run right out to the bookstore and restore this unbalance in your life by picking up a copy of The Essential Calvin and Hobbes, The Indispensable Calvin And Hobbes, The Authoritative Calvin And Hobbes or any of the other Calvin and Hobbes collections; and immersing yourself in the worlds within worlds inhabited by a young boy who fits nowhere and everywhere.

Barring the long-windied tome I have spared you about how wonderful Calvin and Hobbes is, I want to talk instead about Watterson’s drawings, which are also among the best in the history of newspaper comics.

Though you won’t find the grandeur of Winsor McCay, or the representational draftsmanship of Hal Foster or Alex Raymond, you will find a lineage to greats like Greorge Herriman, Walt Kelly and Charles Schulz.

Watterson’s drawings, like his writing, scintillate with whimsical charm, leading your eye around swooping calligraphic lines that are punctuated with the kinetic exclamation mark of his wonderfully out of control lead character.

His short, “Peanuts-headed” kids and lean, liquid-backboned tiger are rendered with a stylistic confidence and visual aplomb that would make his drawings a treat even if you were to delete the dialog and randomize the panels.

Look at something as simple at his trees, a couple of thick, wiggly lines delineating a trunk, some curved hatching for texture and form and a few light lines suggesting limbs, put together with that lively, casual feeling sometimes achieved by the most accomplishes political cartoonists in their line work.

Simplicity was more than a matter of choice, though. Unlike the great newspaper strips of the early 20th Century, which often had the full width of the newspaper sheet across which to unfold their pen and ink worlds, modern newspaper comics have been squeezed smaller and smaller over the last 50 years, to the point where they are more like icons tagged onto word balloons than visual stories.

(Hey, here’s a great idea for newspapers. Circulation is dropping, so let’s take the things people like most about newspapers, like comics and political cartoons, and shrink them down, reduce their number or leave them out entirely, so we can fill more space with ads and flyers and drive more people away and reduce circulation further and then eliminate more features that people like, and so on…, and then complain about how the internet is killing newspapers! Brilliant.)

Watterson bemoaned the stupid shrinking of the comics, but actually had enough clout to change that, even if only slightly and only for his strip, but it was a great change nonetheless. He managed to get his syndicate to offer the Sunday C&H as a solid block, not the collection of individual panels preferred by the editors so they could rearrange (and drop out) panels to fit them into their tiny spaces.

Watterson took advantage of this with marvelously imaginative and adventurous layouts. His colors for the Sunday strips were extraordinary as well. Not that he had any extra colors, he just used them better. At the time, I was convinced that newspapers had reduced the color available to Sunday comics artists, but when Watterson started doing his beautiful, subtle coloring for Calvin’s “Spacemann Spiff” and dinosaur adventures, I realized that the other cartoonists just weren’t taking the time, or trouble, or simply lacked the artistic skill, to take full advantage of what newspaper comic coloring could do.

Unfortunately, the real subtlety of some of this work doesn’t always come through in the reproductions in books. Much like the reprints of comic books from the 1960’s and 70’s, these strips were originally printed on newsprint, a rough, cheap paper that, particularly at the time, was off-white. When reproduced on bright white high-quality book paper, the strips lose some of their tonal subtlety, like a Baroque bistre pen drawing that was originally done on cream paper being reproduced in black and white (that’s right, I’m talking about things like tonal subtlety in reference to a late 20th Century newspaper comic strip).

His longer format strips, done specifically for publication in some of the books, fare better in reproduction and will give you an idea of what I mean about his subtle coloring.

Not to get too high-minded here, I’ll also mention that Watterson drew great dinosaurs, a subject I particularly enjoy; and there were rumors at one point of an actual dinosaur book from him. Though I don’t know if many paleontological artists would worry about him as competition, I do think that most of them would immediately buy a copy if it ever came out.

Watterson retired from Calvin and Hobbes after 10 years, and seems to have been largely quiet since, at least in terms of work available the public; but he left us a great legacy of not only a treasure of a comic strip, but 10 years worth of comic strip drawing at its best.

There are some nice online resources now for Watterson drawings, including much material outside his work on the strip, notably the extensive tribite site Calvin and Hobbes: Magic on Paper which includes a great section of Rare Bill Watterson Art and lots of links to other resources.

Wikipedia has a nice article on Calvin and Hobbes and a shorter one on Bill Watterson, that have links to other resources.

The Universal Press Syndicate’s Calvin and Hobbes official site is rerunning the original strip, just to make our daily routine a little brighter.