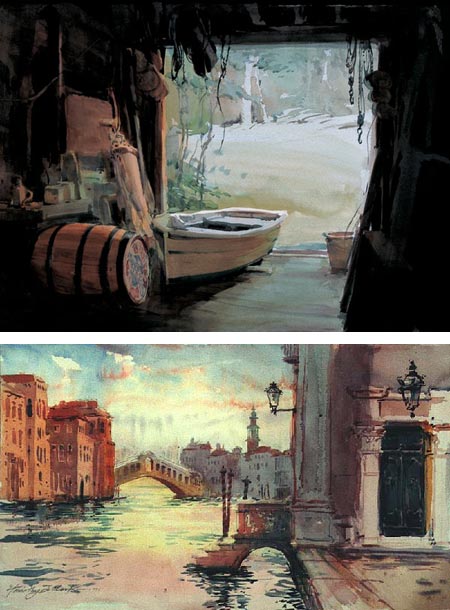 Though he apparently paints in oil as well, I have been unable to find anything but images of watercolors while searching for pantings by Timothy J. Clark.

The watercolors are certainly enough, though. Crisp, clear, confidently rendered and deftly executed, Clark’s landsacpes, architectural views and room interiors are revealed in often theatrical compositions with dramatic casts of dark and light. At other times, his value contrasts are more muted, giving way to subtle variations in color that carry a softer emotional tone.

Clark’s website has a nice but limited selection of his paintings, but you may be able to see a mid-career retrospective of his work that has just opened at the Butler Institute of American Art in Youngstown, Ohio, and will travel to the Whistler House Muesum of Art in Lowell, MA in the fall.

There is a new book accompanying the exhibit, Timothy J. Clark by Jean Stern and Lisa Farrington. Though currently out of stock at the Amazon link I’ve given, you can order it directly from the artist’s web site.

Clark is also an art historian and the author of several books on art history, including The Painting of Modern Life, a fascinating look at the changing role of painting during one of the most interesting places and periods, Paris in the 1860’s and 1870’s, when the nature of painting, its sturcture, technique and subject matter, were undergoing dramatic changes.

Clark’s knowledge of the history of late 19th Century painting carries over into his choice of inspiration, notably the American Impressionists in general and John Singer Sargent in particular.

You can readily see the influence of Sargent’s beautiful watercolors of Venice in Clark’s modern visions of the same entrancing subject in images accompanying an article on TFAOI about a previous show of Clark’s work.