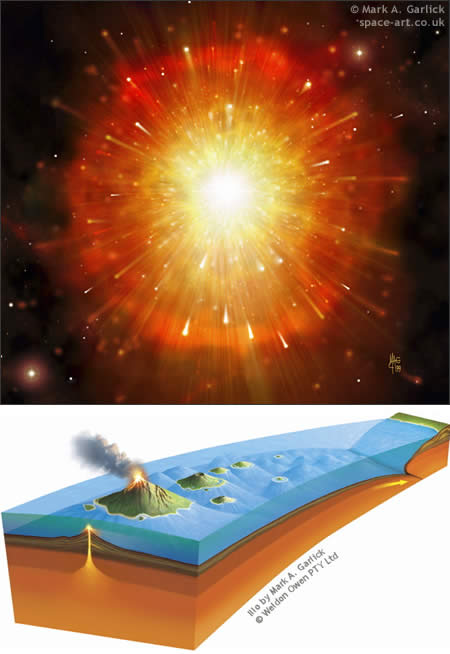 No, It’s not fireworks, at least not of the terrestrial variety.

(For the benefit of those in other parts of the world, I’ll point out that today, July 4th, is Independence Day here in the U.S., a holiday usually associated with fireworks displays.)

The fireworks shown here are celestial, in an interpretation of a supernova, the explosion of a large star that has collapsed in on itself when it can no longer sustain the fusion reaction necessary to hold its current form against the crush of its own gravity, in a painting by U.K. space artist and scientific illustrator Mark A. Garlick.

Garlick has a doctorate in astrophysics, giving him the scientific background to understand the phenomena he is portraying from the inside out. He has a site devoted specifically to his space art at space-art.co.uk, and another more general portfolio site in which he has galleries of earth sciences illustrations, paleo art, science fiction illustration and additional space art.

Garlick was working in traditional media, and some of the images are done in gouache, acrylic or pastel; but the majority of his recent work is done digitally, painted in Photoshop, sometimes with the addition of 3-D CGI in 3DS Max, Terragen or Bryce. He will also mix traditional and digital techniques.

Though he works in a variety of genres, it is his space art and earth science illustrations that I find most appealing. His bright color palette and sense of precise but lively realism give a feeling of immediacy that photography often doesn’t. Of course, one of the things space artists can do is show us views that telescopes and probes cannot. (See my post on pioneering space artist Chesley Bonestell.)

Garlck’s clients include Scientific American, Asimov’s Science Fiction, New Scientist, The Guardian, Astronomy Magazine, Sky and Telescope and others. He is also a fellow in the International Association of Astronomical Artists, an organization devoted to promoting the genre.

Garlick is also the author of five popular books on astronomy.

One Reply to “Mark A. Garlick”