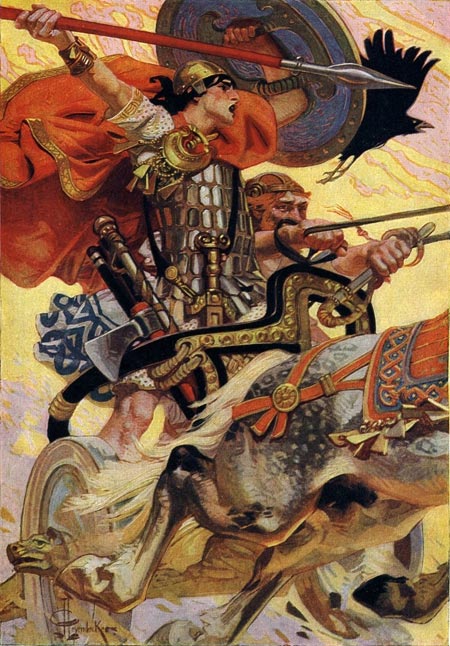 OK, I realize I just posted about the amazing Golden Age illustrator J.C. Leyendecker a couple of weeks ago, and I’ve written about him half a dozen times in the past, but I have this general rule that says there’s no such thing as too much Leyendecker.

The first item I want to tell you about is a limited edition book that accompanies the exhibit I talked about in my last post, Americans Abroad: J.C. Leyendecker and the European Academic Influence on American Illustation.

Frustratingly, my schedule won’t allow me to get to New York before this exhibit closes on Saturday (July 12), but a friend was kind enough to pick up a copy of the exhibition catalog for me.

Aside from the fact that it makes me even more disappointed that I won’t see the show in person, it’s the next best thing, because the book is wonderful. It’s full of beautiful illustrations by J.C. Leyendecker, his brother Francis X Leyendecker (underrated in the shadow of his brother) and a number of other great Golden Age illustrators who were classically trained, including Edwin Austin Abbey, Edwin Howland Blashfield, Anton Otto Fischer, Norman Mills Price, Everett Shinn, William Thomas Smedley, Violet Oakley and others.

The book is a treat and, given the scarcity of Leyendecker material in print these days, a steal at $25 just for the beautiful reproductions of his work.

On that note, the second item is a new Leyendecker book on the horizon (finally!!). J.C. Leyendecker by Laurence S. Cutler, Judy Goffman Cutler is due in September of this year. The link I give here is to the Amazon pre-publication listing.

Lastly, for those who can’t get to the show or grab the book(s), I have a nice new Leyendecker web link as well. An anonymous benefactor who goes by the name of Mr. Door Tree has kindly posted some Leyendecker goodies to his Golden Age Comic Book Stories blog, including the image above, Cuchulain in Battle, from The Century Magazine, 1906, which is also in the Society of Illustrators show and catalog.

Addendum: Unfortunately, as of 8’28/08, the Leyendecker post on Golden Age Comic Book Stories has been taken down, and I don’t know another source for these images. I’ll leave the link in case they reappear.

Addendum II The new book J.C. Leyendecker by Laurence S. Cutler and Judy Goffman Cutler has been published. While I haven’t gotten my copy yet, reports are that they have done a terrific job, investing years of research and filling the book with hundreds of carefully prepared images.

15 Replies to “More Leyendecker and other great stuff”