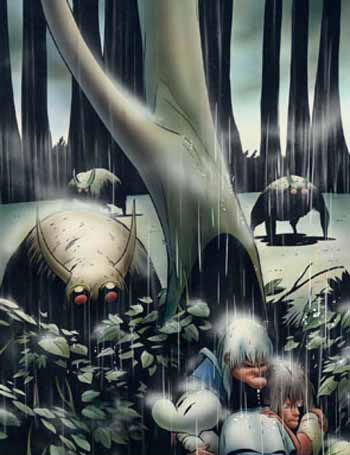 I’m always particularly pleased when the art establishment of museums and traditional galleries shakes itself out of its self-imposed blindness and recognizes comics (“graphic narrative”) as the art form it is; so I was pleased to learn that the work of comics artist Jeff Smith, creator of the highly regarded series Bone, is featured in a new exhibit at the Wexner Center for the Arts in Columbus Ohio, Jeff Smith: Bone and Beyond.

I’ve written about Jeff Smith and Bone before (and here).

The exhibit features 80 of of Smith’s pen and ink pages from Bone, several color covers as well as some of his work on projects since wrapping up the thousand-plus page series, including his Shazam series for DC Comics and his new ongoing series Rasl.

Bone (Amazon link) was published as black and white trade paperbacks, then collected in a 1,300 page graphic novel (in the true sense of that term, not the way it’s misused by the comics industry as a catchall for squarebound comics), and then rereleased as a series of color trade paperbacks, with coloring by Steve Hamaker.

The exhibit at the Wexner Center also includes a selection of classic comics art from artists that Smith considers direct influences on his work and style, including original pages and panels from Walt Kelly’s Pogo, Will Eisner’s The Spirit, Carl Barks’s Uncle Scrooge, Garry Trudeau’s Doonesbury, and E. C. Segar’s Thimble Theatre.

There is a catalog created to accompany the exhibit, which also includes the work of the other artists. There is a five minute video on the Wexner site with an interview with Smith.

The exhibit at the Wexner Center runs until August 3, 2008.

A related exhibit, Jeff Smith: Before Bone is running concurrently at the nearby Cartoon Research Library of Ohio State University. It features his work on Thorn, Smith’s strip for the campus newspaper, The Lantern. There is also a catalog to accompany this exhibit.

You can always catch up on the latest news about Jeff Smith and his work on his Boneville blog. You can also order Bone, Rasl and related items directly from Smith’s online Shop.

3 Replies to “Jeff Smith: Bone and Beyond”