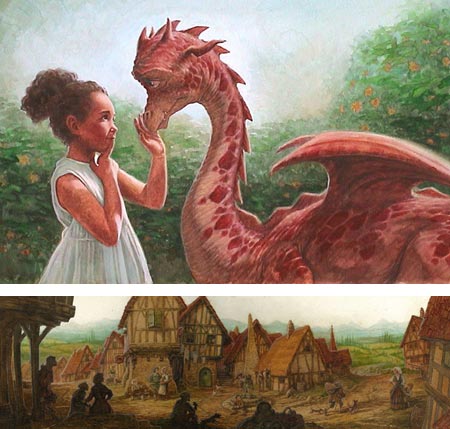 PJ Lynch is an Irish illustrator currently living in Dublin. His award winning illustrations have appeared in numerous books, illustrating both modern stories and new versions of classics.

Lynch has also been commissioned to design posters for Opera Ireland and the Abbey Theatre, created murals for the Cavan County Library based on Gulliver’s Travels and designed stamps for the Irish postal service.

You can see some of the latter in a recent post on his blog, on which he also links to his 6 step by step painting videos on YouTube. You will also find some of his gallery paintings.

There is also a step by step article on the creation of his cover for The Gift of the Magi on Scamp, the Irish illustration blog.

For his illustrations, Lynch works primarily in watercolor. At times his illustrations can be evocative of classic illustrators like Arthur Rackham or Edmund Dulac, at other times they have a modern feeling; Lynch adopts his stylistic approach to the service of best illustrating the story.

Throughout, there is careful attention to the role of light, particularly the muted light of overcast days or candlelit interiors, and a masterful handling of textures and suggestions of the tactile surfaces of things.

Lynch has that quality evident in the best illustrators of understanding the theatrical application of his compositional elements; his lighting, color and textures are not just creating an image, they are also telling a story.

His gallery of book illustrations will take you through a series of covers, from which you can click to see images from the individual title. There are several pages of thumbnails, and a number of books. (Don’t miss his wonderful interpretation of Dicken’s A Christmas Carol toward the back.)

Lynch’s six (to date) step by step painting videos are short, nicely done and fascinating. They are simple, but gracefully timed and well photographed. They take you through his process from initial sketch to finished painting with just enough steps to get a good feeling for his watercolor or oil technique.

I was particularly fascinated by his video showing him painting the portrait of a young boy in a baseball cap, based on a photograph and inspired by his study of Vermeer’s Girl With a Pearl Earring (which he titles The Boy with the Blue Baseball Cap: I am not Vermeer!).