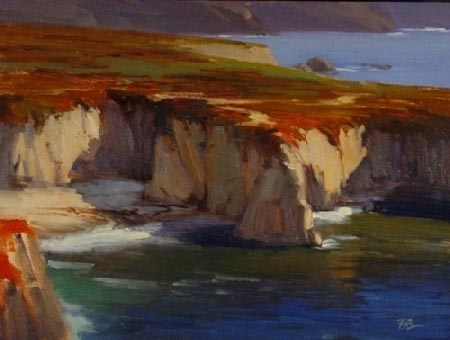 When I first encountered the paintings of California plein air painter Brian Blood on the site of the Jones and Terwilliger Galleries, it was in compositions that brought to mind the work of pioneering California Impressionist Granville Redmond, who reveled in the intense colors of the California poppy fields around the turn of the 20th Century.

Apparently, those fields are still in evidence in parts of the California countryside, giving Blood the opportunity to fill some of his canvasses with brilliant splays of color against verdant hills.

On viewing the extensive portfolio on his own site, I found his direct painterly approach applied to scenes of the rocky California coastline, particularly in places with those wonderfully shaped Cypress trees with horizontally extended crowns, as well as other views of California hills, valleys and mountains.

When viewing the work on his site, you can click to enlarge one of the images and then continue to click through in the larger versions (actually, the middle-size images are superfluous in this age of large monitors and fast connections).

If you go deeply enough into the series of works, you’ll find very nice on location paintings of various places in Paris, as well as a few still life paintings that are often composed in the theatrical glow of a table lamp.

Blood’s early career was as an illustrator and graphic designer. He transitioned into gallery painting about 17 years ago and has been a participant in numerous plein air organizations and events. He also taught for over ten years in the Fine Art Department of Academy of Art University, and currently leads workshops and advanced workshops in plein air painting at several locations in California.

His work has been featured in Southwest Art, Art of the West, Artists Magazine, Coast Magazine and American Artist.