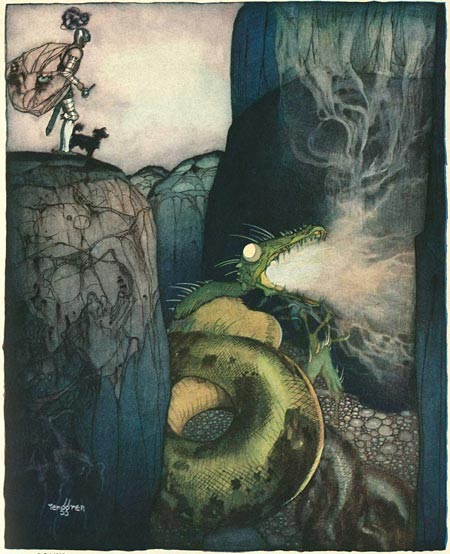 The indefatigable archivists at the ASIFA-Hollywood Animation Archive continue to amaze, amuse, entertain and enlighten us with great examples of Golden Age illustration that are being added to their database.

Notably, they have added to their considerable reserve of dazzlingly beautiful illustrations by Gustaf Tenggren, an underappreciated Swedish illustrator who I wrote about previously here and here. The latest article includes images from a rare 1923 edition of Grimm’s Fairy Tales.

Tenggren’s illustrations carry some of the best pictorial elements to be found in the work of his contemporaries Arthur Rackham, Kay Neilsen and Edmund Dulac, and his equally underappreciated countryman, John Bauer, along with his own unique style that probably had equal influence on them.

Tenggren was at his best illustrating fairy tales, but he ventured into other territory, and other posts on the ASIFA Archive include some of his early work in styles rarely seen, like his illustrations for Nethaniel Hawthorne’s Wonderbook and Tanglewood Tales, Johanna Spyri’s Heidi and Juan and Juanita by Frances Courtenay Baylor, all three of which are featured in this article.

In addition they have posted two of Tenggren’s other books, D’aulnoy’s Fairy Tales (from which the image above is taken) and The Good Dog Book in this article.

I’ve listed some of the other ASIFA articles on Tenggren below. You’ll find links to them, and lots of other amazing work, in the Classic Illustration section of their “Top Ten Reasons to Contribute to A-HAA” page, which, as they point out, is just the tip of the iceberg.

As always with the ASIFA posts, click on the image for stunning high-resolution versions that begin to do justice to this amazing artist’s landmark illustrations.