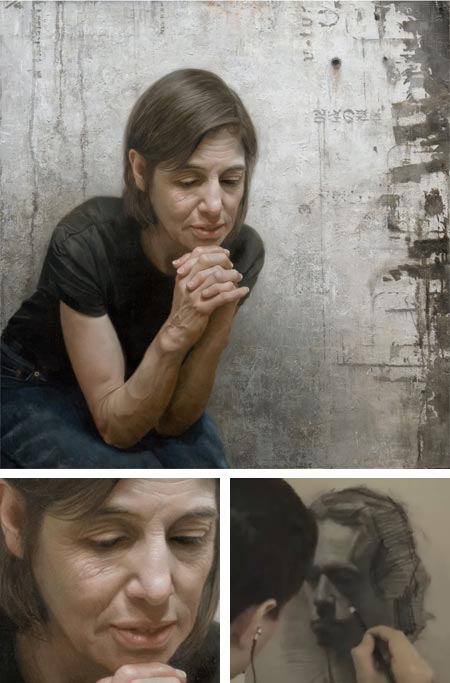 Brooklyn based artist David Jon Kassan was born in Arkansas and studied in Philadelphia, New York and Florence, Italy.

He has lectured, taught and given workshops at numerous universities and art centers, including the Rochester Institute of Technology, Western Illinois University, Syracuse University, National Academy School of Fine Art, the University of Alabama, the National Academy of Design and the Salmagundi Center of American Art.

On his web site you will find examples of his striking realist portrait and figurative paintings, in which he often contrasts the colors and textures of his subjects with the rough textures of age-worn urban interiors. He seems so fascinated with the latter that he actually does preparatory studies of wall sections, investigating the textures of aging plaster, exposed lath and peeling paint.

His real fascination, though, is portraiture, and specifically, the anatomy underlying the portrait and figure. There is a time-lapse video on his site of a portrait demonstration at the Salmagundi Club in New York, three hours condensed into 8 minutes (image above, lower right), in which you can see the emphasis he places on the underlying geometry of the face.

There is also a PDF booklet available for a modest fee, of An Artist’s Guide to Portrait Anatomicae, originally prepared for his students.

There is a selection of his drawings on the site. Though they are brought to a fairly high state of rendering, they are largely anatomical studies.

Kassan also has a blog, in which you can see some works in progress, studio and demonstration photos and a video showing his paintings on display at the L.A. Art Show.

His paintings show the kind of naturalistic fidelity that only comes from careful and incisive observation, combined with a solid grounding in traditional technique and anatomical study.

His palette is intentionally subdued, as are his compositions, so that the highest chroma passages are often in the warm skin tones in faces where small blood vessels run closest to the surface.