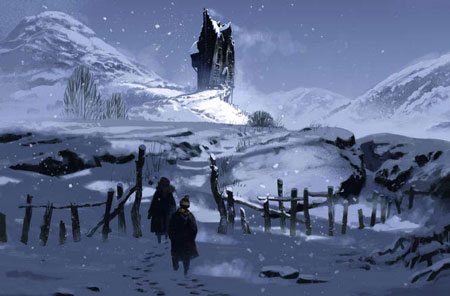 I can tell you little about Adam Brockbank, except that he is a film industry concept and storyboard artist, and quite a good one.

There is also a selection of storyboard work from films and television productions like Harry Potter and the Philosophers Stone, Dinotopia, Alice in Wonderland, Lost in Space and The Borrowers.

You can see a more complete list on the IMDB site.

His storyboards are clear and crisp, with just enough tone work to suggest lighting and atmosphere. His concept art ranges from briefly notated sketches to fully rendered paintings of complex and large scale scenes. He seems particularly adept at portraying the cities and scenes of ancient civilizations as depicted in movies like Alexander, Troy and Fire from Heaven; combining a National Geographic feeling of historical reconstruction with a cinematic flair for drama.

In between his lightly rendered and highly rendered approaches are paintings that frequently look more rendered than they are, in which his artful economy of notation conveys a great deal of atmosphere and mood in the choice of large areas of color balanced with smaller passages of detail.

There is also no indication of medium or technique on the site, but it looks like he paints digitally, though his work can have a feeling of traditional painterly materials.

I can’t give you direct links to sections because the site is in Flash, but be sure to view his wonderfully realized historically themed paintings for Fire from Heaven.

Addendum: Adam was kind enough to write and let us know that he has been working on a new comic called Mezolith, written by Ben Haggarty, that debuts next week in issue 15 of The DFC, a UK kids comics anthology. You can see a preview here.