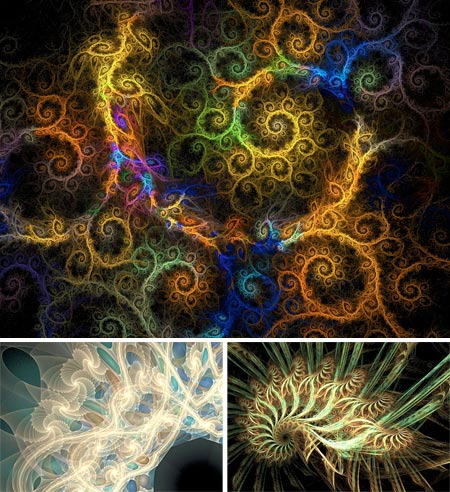 The COLORlovers blog, which I mentioned in this post and in my post on the History of the Color Wheel, has posted an article with a nice collection of Fractal Art.

I find these kinds of images, created by manipulating the paramaters by which certain mathematical functions are interpreted, to be endlessly fascinating; both for their intricate beauty, and for the intriguing relationship they have to natural forms, organic and inorganic.

Most of the images in the article are linked to originals on Flickr, where you can view large, high-resolution versions; and get an appreciation for the delicate latticeworks of color and form, and the descend-into-infinity nature of their recursive relationships .

Many of the Flickr sets are part of photo streams that are associated with the Club Apophysis group pool, named for the open source fractal flame Windows software, Apophysis.

The COLOURlovers article also includes some nice examples of fractal patterns found in nature, with images of plant forms, seashells, river basins and coastlines, and goes on to mention and show some of the winners from the Benoit Mandlebrot Fractal Art Contest 2007, named for the mathematician who coined term and created the original mathematical expressions on which images like these are based.

(Above: fractal images by longan drink, exper and Lynn)

2 Replies to “More Fractals on COLORlovers”