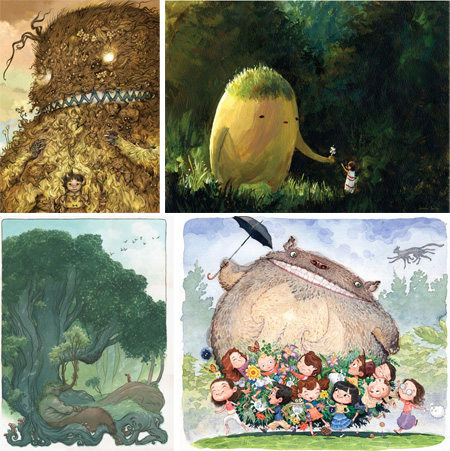 Hayao Miyazaki, arguably the foremost director of anime (Japanese animation), has long been concerned with issues of the conservation of the natural world. It is evident in his work, in films that deal directly with the subject, like Princess Mononoke, and as a pervasive theme through all of his films, though the subject is never handled in a simplistic, heavy handed or preaching manner.

Miyazaki has also been active in real-world preservation efforts, in particular the ongoing effort to preserve Sayama Forest, a large urban park just outside the limits of Tokyo that served as the inspiration for my favorite of his films, My Neighbor Totoro (see my post on Hayao Miyazaki).

Economic and population pressures from one of the world’s most populous cities is putting increasing pressure on the forest, as is happening to forests worldwide.

In what is partly a direct effort to save this particular forest, partly an effort to set an example and send a message about not squandering our natural treasures worldwide, and partly an acknowledgement by artists of their admiration for Miyazaki and his accomplishments, a number of artists, including Daisuki “Dice” Tsutsumi, Enrico Casarosa, Ronnie Del Carmen and many others from Pixar Animation Studios, are participating in a benefit auction of artworks to benefit the “Totoro No Furusato National Fund”, a non-profit that is working to preserve the forest.

The forest itself has become associated with Miyazaki and his character Totoro, who is a kind of forest spirit, and the project is called the Totoro Forest Project.

Unfortunately, despite the fact that Eric Orchard was kind enough to let me know about this well in advance, I got the dates wrong and I’m late in telling you about it. The online auction ended yesterday. I apologize for the late notice; I thought the online auction began today, but today (September 6, 2008) is actually the date for the live auction event at Pixar Studios.

You can still browse the gallery of works on the site, and make a direct contribution to the preservation effort, or purchase the book of art from the project, the proceeds of which also go to the non-profit. (The site isn’t clear about how to purchase the book yet, but says it will be available today.)

A selected group of the works will be featured in a special exhibition at the Cartoon Art Museum in San Francisco from September 20th to December 7th, 2008.

3 Replies to “The Totoro Forest Project”