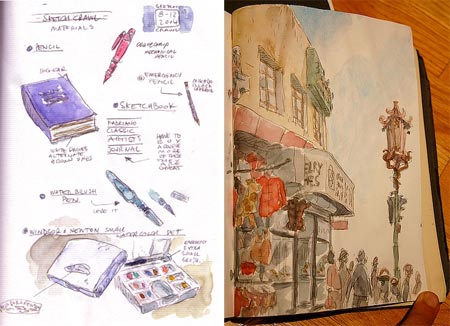 As I noted when I first wrote about it back in 2005, SketchCrawl is a series of outdoor group drawing events, originally conceived by Pixar artist and illustrator Enrico Casarosa, as the artistic equivalent of a pubcrawl (seem my post on Enrico Casarosa, and here).

He started to organize the events ahead of time, in which artists would gather at a predetermined point and wander the city (originally San Francisco) sketching in various places, usually with small sketchbooks and portable watercolor equipment.

Since then the event has continued, expanded and spread to multiple locations worldwide, each organized by a local individual, but timed for the same day and coordinated through the SkwtchCrawl site and forums.

You can see listings of some of the events in various locations around the world in the SketchCrawl Forums (note at the bottom a link to the second page), view some suggested materials (image above, left, both images by Enrico Casarosa), or view the page on how to participate, even if starting your own local SketchCrawl with as few as one participant.

You can find more on the SketchCrawl site or blog.

[Link to current event via Drawn!]